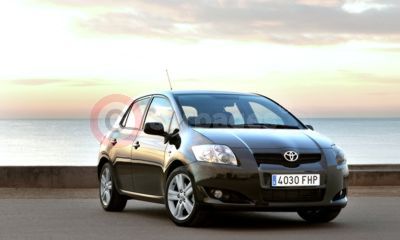 The new Toyota Auris makes its European debut this week at the Bologna motor show in Italy, ahead of UK sales starting on 1 February next year. Designed and built in Europe, the new C-segment family hatchback marks significant advances in dynamic ability, interior style and practicality and safety.

The unveiling of the production model follows the presentation of Toyota's Auris Space Concept at the Paris motor show earlier this year. Full details of UK specifications and pricing will be announced closer to the model's on-sale date.

Auris is built on an all-new platform and is larger in every dimension than the Toyota Corolla. A special focus on reducing NVH characteristics make it one of the quietest cars in its class, with strengthening of the underbody reducing boom and road noise and efficient aerodynamics cutting the level of wind noise.

New suspension systems have been developed for the Auris with an L-arm MacPherson strut arrangement at the front and a torsion beam at the rear.

In line with its position as the performance flagship of the range, the Auris D-4D 180 makes exclusive use of a new double wishbone rear suspension and rear anti-roll bar for more dynamic driving character.

As witnessed in the Auris Space Concept, the designers have worked from the inside out, in order to make best use of the space available for storage points and passenger comfort. A key feature of their innovative approach is a striking bridge-shaped console that raises the gear lever higher on the dashboard, closer to the driver, and integrates the handbrake, creating more open space below.

Auris also adopts Toyota's EasyFlat system that allows simple one-touch folding of the rear seats to create a larger, flat-floored load area. Boot capacity is 354 litres and the 10 storage areas around the cabin have a combined capacity of 32 litres.

Comfort for rear seat passengers is increased thanks to a larger couple distance between the front and rear seats than in the Corolla, giving extra legroom. Head and shoulder room are also better, due to the Auris's greater cabin height. Clever design has also eliminated the tunnel carrying the exhaust system, giving a flat rear floor and thus more comfortable accommodation for any centre rear seat passenger.

The strong body structure uses Toyota's MICS (Minimum Intrusion Cabin System) to provide effective challenging and absorption of impact forces away from the passenger cell in the event of an impact.

Up to nine airbags will be fitted, with a driver's knee airbag provided as standard - a first-in-class feature. Active safety elements on all versions include ABS with Electronic Brakeforce Distribution (EBD) and Brake Assist (BA), with higher grade models additionally equipped with Vehicle Stability Control (VSC) and Traction Control (TRC) systems.