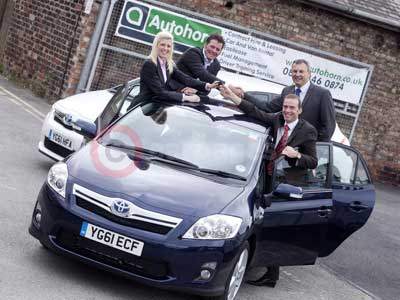 Autohorn Fleet Services operates a fleet of 600 vehicles but has previously only offered a small number of Toyota vehicles. Now, alongside the 60 Toyota Auris Hybrid hatchbacks, the company as also ordered 50 Toyota Aygo ICE 1.0 litre hatchbacks for city driving.

"Ordering the hybrids was very much a conscious decision to enable us to offer our customers a genuinely environmentally friendly vehicle, either for short or longer-term hire," says Autohorn's Head of Sales Neil O'Connor.

"We decided on Toyota on the basis of price, service and the car itself, how it looks and its specification. High levels of equipment are important because we separate ourselves from our competitors by offering higher-end vehicles for no extra cost whatsoever. We knew we wanted a high spec petrol-electric hybrid - and there‘s nobody better in the market for that.

"We have larger corporate and Government-funded customers who are committed to reducing their carbon footprint, and ask us to supply the greenest vehicles we have. Historically we used really low-CO2 diesels to fulfil that requirement. We're really excited to be able to go back to those customers and say that we now have super low emission cars that we can supply."

"while the cars are with us we need them generating revenue rather than in a garage, so reliability is another important factor," says Neil. "We also want to be playing our own part in reducing emissions," he adds. "The 60 vehicles we’ve bought represent thousands of tonnes of CO2 reduced."

"We chose the Aygo because it’s a funky, inexpensive-to-run city car,” says Neil O'Connor. “We felt it would be a really attractive, fuel-efficient proposition for our longer-term rental customers. The specification level is very high, and the cars represent great value for money."