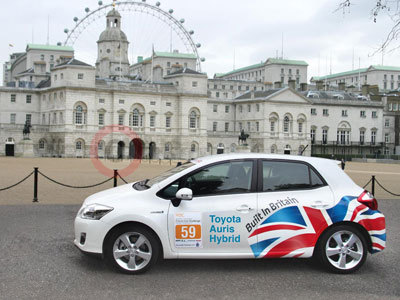 For the historic vehicles taking part in the annual London to Brighton Veteran Car Run, simply completing the 60-mile route might be considered achievement. A quite different test faces the fleet of hybrid Toyota models that will be to the fore in the first Brighton to London Future Car Challenge.

The challenge, organised by the Royal Automobile Club, is designed to demonstrate the benefits of new engine technologies in saving fuel and reducing emissions. Taking place on 6th November 2010, the day before the veteran car rally, it will culminate in a grand public display bringing the ancient and modern machines together in London's Regent Street.

Toyota has led the motor industry in developing and bringing hybrid power to the market and it will be showcasing its achievements and its future ambitions by entering more than a dozen cars in the event.

The timing coincides with the 10th anniversary of the launch of the Toyota Prius in the UK and to help celebrate the occasion, all three generations of the world's most popular hybrid - two million sales and counting - will be taking part.

They will be joined by the model that represents the next development of Toyota Prius, the Toyota Prius Plug-in Hybrid. Thanks to its compact, powerful lithium-ion battery, Toyota Prius Plug-in can be driven for up to 12.5 miles on electric power alone, at speeds up 62mph. And when the battery charge runs low, the hybrid system's petrol engine automatically cuts in. For a full recharge, the car can be linked up to a domestic power supply or roadside charging point and be back up to full power in about an hour-and-a-half. Currently undergoing a leasing demonstration programme in London, Toyota Prius Plug-in will begin a phased market introduction within the next two years.

The FCHV-adv fuel cell system features four compressed hydrogen fuel tanks, an electric motor, a nickel-metal hydride battery, and a power control unit. Hydrogen gas is fed into the fuel cell stack where it is combined with oxygen. The electricity produced by this chemical reaction is used to power the electric motor and to charge the battery. In addition to superior fuel economy, the FCHV-adv produces zero emissions while driving.

Toyota's team of drivers will include leading motoring writers from around the UK and, at the wheel of a Union Flag-liveried Toyota Auris Hybrid, UK Electric Land Speed Record Holder Don Wales.