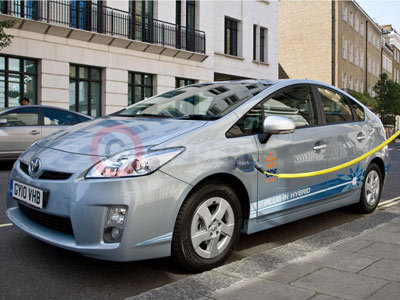 Toyota and EDF Energy's demonstration of the of the Plug-in Hybrid Electric Vehicle (PHEV) in London interim results reveal real world data that show the technology is capable of delivering improved fuel efficiency with lower emissions for urban driving situations.

Working alongside EDF Energy, Toyota has leased 20 PHEVs to businesses and organisations across London in order to monitor vehicle performance and recharging patterns. The PHEV is based on the third generation Toyota Prius, and is equipped with a lithium-ion battery which provides long distance coverage and high speeds using only electric power. The battery's charge can be topped up by plugging the car into a dedicated electricity supply at the workplace, on-street charging point or at home.

Details of journey times, speeds and distances, fuel usage and vehicle recharging have been logged since the three-year demonstration began last summer. Information gathered so far in the UK shows that: -

The interim findings by Toyota and EDF Energy illustrate that PHEV's performance is suited to urban driving demands, with the car being capable of running for up to 12.5 miles purely on the electric motor in EV mode at speeds of 62mph. The result of this is that the majority of typical urban journeys can be completed with no petrol consumption of tailpipe emissions.

Should the battery power be consumed before a recharging opportunity, PHEV will automatically switch to its full hybrid system utilising a 1.8 litre VVT-i petrol engine.

The perception of users is also being conducted and monitored with regular interviews by Oxford Brooks University, with feedback so far showing a positive result the both the car and its performance as well as the procedure and equipment used for charging.

Data collection continues, and will provide Toyota and EDF Energy with a resource for learning about end user priorities and preferences for how they use and recharge their vehicle. These results and results from across Europe will allow for a strategy to be formed for the design and marketing of a full production PHEV as well as introducing effective charging opportunities and infrastructure to promote low carbon energy usage.