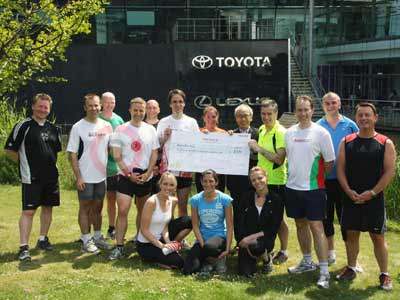 Employees from Toyota's head office in Surrey, supported by top athletes, have raised £4350 by completing a five kilometre run in aid of the Japan earthquake and tsunami appeal.

The event, called Run for Japan, was organised by the Toyota employees and raised £2175 for the for the British Red Cross's appeal. Toyota's funding initiative, the Fund for a Better Tomorrow, doubled the total.

A cheque for the funding was presented by Naoya Taniguchi, Chairman of Toyota (GB) PLC to the British Red Cross. He said: "We were delighted that Noel and Tom were able to visit us and take part in the run which saw staff raise money for this vital cause."

Noel us registered blind and has competed in six Paralympic Games winning five gold medals and setting a world record for the 1500 metres at the Barcelona Paralympics in 1992. In 1997, he was made an MBE for services to disabled sport. Tom is a regular marathon competitor and is the presenter of Marathon Talk with steeplechaser Martin Yelling. The Marathon talk podcast has been downloaded 503,000 times in 137 countries across the world.

Noel said: "It's great to witness people from different walks of life united with one common interest - running - to support those affected by the earthquake and tsunami in Japan. Both Tom and I are touched by the dedication shown by the Toyota employees and the fantastic amount raised."

The money collected will go towards providing first aid, emergency healthcare and helping people to rebuild their communities.