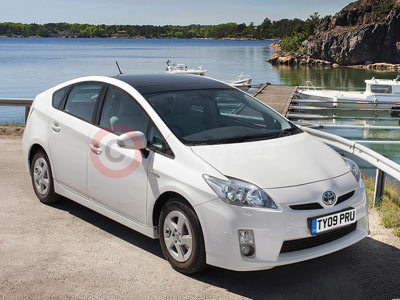 The Toyota Land Cruiser V8 retained its top position in the large 4x4 category for the third year running, and the Toyota Prius won the inaugural Green Car category.

The Toyota Prius earned the new honour for having the lowest emissions among the UK's top-rated cars for security, acknowledging the importance today's motorists place on vehicle protection standards and CO2 performance, for peace of mind and lower ownership costs.

Mike Briggs, Thatcham's Vehicle Security Manager, said, "It's great to see Toyota taking first place in both the Large 4x4 and the new Green Car categories. Prius demonstrates that consumers concerned about both security and the environment need not compromise. Toyota's success shows its commitment to design-out crime, thereby reducing the risk to insurers and the motoring public."

Te Toyota Prius's advanced Hybrid Synergy Drive system allows it to be driven using its petrol engine, electric motor or a combination of both to achieve optimum efficient performance - CO2 emissions are from just 89g/km. And as a full hybrid, it can run at low speeds over certain distances on its electric power alone, giving zero fuel consumption and tailpipe emissions.

The iconic Toyota Land Cruiser V8 is now in its eighth generation. With the ability to seat seven and a host of sophisticated handling, suspension and drivetrain systems, it ensures safety, comfort and secure handling both in the rough and on the open road.

The British Insurance Vehicle Security Awards are designed to raise consumer awareness of best practice in vehicle security. Vehicles are assessed according to the New Vehicle Security Rating Scheme (NVSR), with points awarded under the categories of 'theft of' and 'theft from' the vehicle. The winners are the models achieving the highest score in each category