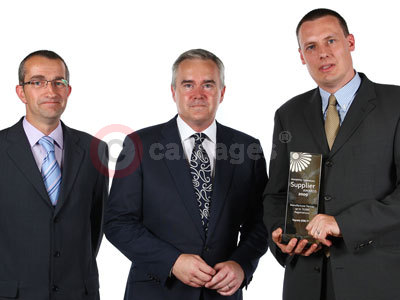 Toyota (GB) PLC has been recognised as the top Manufacturer Partner of the Year (up to 10,000 units) at the annual Supplier Awards presented by Motability Operations, the company which manages the Motability Car Scheme.

Setting standards for excellence and sharing best practice, the Supplier Awards take place each year and recognise the manufacturers, dealer groups, individual car dealers and aftersales specialists, as well as key suppliers to the Car Scheme who all deliver service to the organisations' half a million customers every day.

Mike Betts, chief executive, Motability Operations, explains: "This has been a positive year for the Motability Scheme and key to this has been the work of our business partners and suppliers who provide the highest levels of service for our customers. Toyota (GB) PLC should be truly proud of their achievement as the Manufacturer Partner of the Year (up to 10,000 units) at the 2009 Motability Operations Supplier Awards. They have performed a key role in helping deliver exemplary levels of customer satisfaction and setting the standard for business excellence."

Toyota (GB) PLC was specifically commended for several reasons including its commitment to competitive pricing on the Motability Scheme through 2008 and ongoing support for customers through the Toyota Centre network. The launch of the Toyota iQ alongside the new Toyota Avensis in 2008 added a new dimension to Toyota's line-up available on the Motability Scheme and contributed towards a 47 per cent increase in Toyota registrations in 2008. Furthermore, with the introduction of new lower CO2 engines, Toyota Optimal Drive technology with MultiDrive transmissions, and third generation Hybrid Synergy Drive, Toyota has shown its commitment to leading the way in reducing CO2 emissions.

Accepting the Award presented by news reader Huw Edwards, Toyota's Commercial Director, Jon Williams said: "We are hugely pleased that our commitment and excellence has been recognised as the top Manufacturer Partner of the Year (up to 10,000 units), and we look forward to continuing to work with Motability Operations into the future."