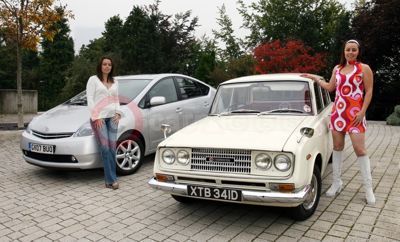 A car in which seatbelts are a luxury option, the turn of a key is the only protection against thieves and anti-pollution measures are non-existent, wouldn’t even make the drawing board today, but it was with just such a model that Toyota made its UK market debut.

Since the arrival of the Corona saloon, little more than 40 years ago, Toyota has become established as one of the world’s largest and most influential car makers, its products benefiting from advanced design and engineering for cleaner, safer and more rewarding performance. While the humble Corona was a worthy product in its day, comparing it to a modern hybrid power Toyota Prius reveals just how far Toyota and the auto industry have progressed.

The Toyota stablemates appeared side-by-side today in an event organised by the Society of Motor Manufacturers and Traders to illustrate how cars have evolved and the challenges faced by the industry in improving safety and emissions, while delivering the comfort and convenience customers demand – all at an affordable price.

Back in 1966 a new Corona would set you back £777, the equivalent of more than £7,500 at today’s prices but in those days not much less than the average annual wage. The 2007 Prius range starts at £17,777, a price tag that includes an eight-year warranty on the hybrid system components.

The Corona’s “silent cruising” was a key message in the original advertising copy, which also trumpeted the car’s 90mph top speed and up to 35mpg fuel consumption. Where Prius is concerned, silent running is fact rather than flannel, thanks to its ability to run purely on power from its electric motor at low speeds. Like Corona, there is a 1.5-litre petrol engine under the bonnet, but as part of the hybrid power system, it is capable of giving acceleration to 62mph in 10.9 seconds (more than two-and-half times quicker than the Corona) and 65.7mpg in combined cycle driving.

Emissions didn’t enter the argument in ’66, owners simply filled up with a tank of lead-rich four-star. Safety, too, was of little concern: Corolla owners had to spend another £10 for seatbelts, while Prius drivers have the benefit of built-in crash protection, airbags and a suite of sophisticated braking and handling control systems, developed through multi-million-pound research and development programmes.

Then as now, however, quality and reliability were essential factors. “Double Checked a Hundred Times,” the Corona’s advert proclaimed, just as the 21st century Toyota range benefits from production methods that ensure superior quality throughout.