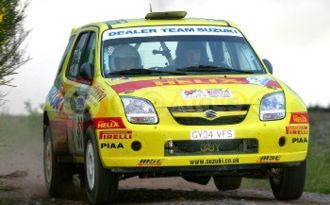 Wilks (Darlington), and co-driver Phil Pugh (Towyn, Gwynedd) won nine of the ten special stages in the Super 1600 class to finish nearly a minute and a half ahead of nearest rival, Leon Pesticcio (Fiat Punto).

The result pushes Wilks up into second place in the Kwik-Fit Pirelli British Super 1600 Championship, following his maximum 20 points score in the previous round in Wales.

Wilks (aged 23), said: “I’m absolutely delighted to secure another maximum points and feel on top of the world at the moment. The car was superb throughout, except for a slow puncture on stage six, which lost us just a few seconds.”

Phil Pugh (aged 33) was equally happy with the Super 1600 win. Said Pugh: “It was a great win and a fantastic achievement to finish in fourth place overall. The championship challenge is now on but we’ve got to produce a few more results like this to be in with a chance of winning the British Super 1600 Championship.”

The win comes on the back of a superb drive in the Acropolis round of the JWRC last weekend (4-6 June) Wilks added: “The last ten days have been very tiring but given me such big rewards with victories in both Scotland and Greece. I can’t wait for the next rally.”

Dealer Team Suzuki’s Team Manager Risto Laine was the first to praise Wilks on his drive. He said: “Guy has produced a great drive this weekend and has deservedly won the Super 1600 class and finished an incredible fourth overall. He now needs to keep producing these results to show people just how good he can be.”

Wilks and Pugh now head for Turkey and the Junior World Rally Championship (June 25-27) with the next British event being the Jim Clarke Rally (July 2-3).