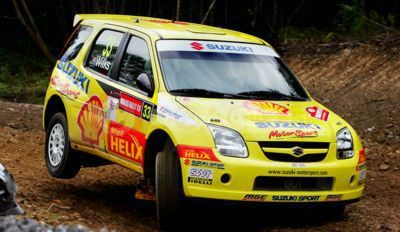 Guy Wilks has claimed his second Junior World Rally Championship victory for Suzuki, moving into the lead of the series for the first time! Kosti Katajamaki racked up his third consecutive podium finish with third place, while Jari-Matti Latvala finished fifth.

In total, the Suzuki Ignis won 11 of the event's 19 stages. Unfortunately Mirco was forced to retire from the lead after an accident on Sunday's loop of stages, while P-G Andersson went out on the second day after a stray rock punctured a brake hose.

The Rally Great Britain, round five of the Junior World Rally Championship, was characterised by fast gravel roads through the flowing forests of south Wales, making it one of the most breathtaking and closely-fought events of the championship. Conditions remained variable throughout all three days, with rain but also bright sunshine.

The Suzuki Ignis teams in action

Guy came to his home event with only one thought on his mind: victory. However, he suffered a couple of problems including a spin and a puncture that - early on - compromised his chances of the top spot. He entered the final day just half a minute behind the then leader, Mirco Baldacci, and moved into the lead after the San Marino driver's retirement.

From there he controlled his advantage over Kris Meeke through to the finish to move into the Junior World Championship lead.

He said: "Great Britain is always an unpredictable and incredibly challenging event and it was all the more so this year. It's been a very tough three days and I've had quite a lot of pressure on my shoulders. It wasn't such a good start to the rally as we had a few little problems such as a puncture. But things got steadily better and I think we were obviously putting Mirco under a bit of pressure. After he went out, we just concentrated on getting safely to the finish."

Kosti, backed by two-time World Champion Marcus Gronholm, is a gravel expert and enjoyed a flying finish to the Rally Great Britain. He set a fast but sensible pace to make sure of third place; his third consecutive podium finish with the Ignis. The Finn suffered no major problems throughout the rally and his car was totally reliable, although he too was affected by a puncture in the opening stages.

The Rally Great Britain was only the second event in the Ignis for Jari-Matti after he switched manufacturers earlier in the season. He started the rally with the firm aim of getting to grips with the Ignis and learning more about its capabilities on gravel, and finished it with a solid haul of points in his pocket, despite a small problem with the front suspension.