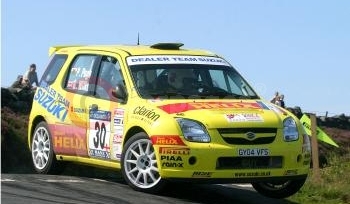 A gearbox problem on the penultimate stage (stage 22) almost cost Wilks the victory. But, after being stuck in neutral for 15 minutes in the road section between stages 22 and 23, he was able to find third gear and completed the final stage, albeit a little slower. The result propels Wilks into a commanding 18 point lead in the Super 1600 Championship, after previous leader Jonnie Wigmore (Ford Puma) was forced to retire during Friday’s second leg following an accident.

Wilks said: "I’m elated to have won the Manx Rally and be leading the Super 1600 Championship after such a demanding three days. It has proved most demanding for team, car, Phil, and myself but we’ve come through with flying colours. Our hearts were in our mouths before the stage 23 as we thought the gearbox problem had cost us the rally, but we managed to clear the stage after making a temporary fix following a lot of heated debate between Phil and myself!"

Phil Pugh (aged 33) was equally relieved with the Super 1600 win. Said Pugh: "We’ve put in a huge amount of hard work to prepare properly for this event and the win is reward for the effort. We’ve now won both tar events in the championship and will go for a hat trick on the next round in Ulster."

Wilks added: "The car was nervous and twitchy during the first day, but having built up a good lead I was able to take things a little easier and test different settings on the tar surface with the next British event, Ulster in mind."

Dealer Team Suzuki’s Assistant Team Manager, Ian Phillipson, admitted the victory could so easily have been snatched away. He said: "Guy drove sensibly all weekend and deserved his victory, but after his gearbox problem towards the end the team were ecstatic to see him cross the finish line."

Wilks and Pugh now fly out to Finland to compete in the Finnish round of the Junior World Rally Championship (Aug 6-8).