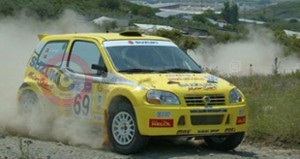 Three Suzuki Ignis Super 1600 cars have finished second, third and fourth in the Acropolis Rally - widely acknowledged as the toughest and most demanding event in the Junior World Rally Championship [JWRC].

Only six of the twenty two JWRC cars that started from Athens last Thursday [June 5] made it to the finish on Sunday and with three of them Suzukis it was an impressive demonstration of the astonishing reliability of drivers, co-drivers and their Suzuki machinery.

The remainder of the field fell victim to the sharp rocks and searing heat that characterise the Greek round of the World Championship where - with cockpit temperatures of more than 50 degrees centigrade - only the fittest cars and drivers survive.

Leading the Suzuki challenge and despite a puncture on stage 11 Sweden's Daniel Carlsson finished a strong second, just 55 seconds behind Brice Tirabassi in his Renault Clio 16V Super 1600.

Estonian Urmo Aava was third and Salvador Canellas from Spain not far behind in fourth, making it a truly memorable event for the Ignis Team and for Suzuki.

Collectively the Ignis Team was fastest on 8 of the 22 stages - which totalled 248 miles [400 kilometres] -and recorded second fastest times on 11 others. The only retirement from the four car Ignis squad was Finn Ville-Pertti Teuronen who was forced out by a broken drive shaft on the first day when in third place.