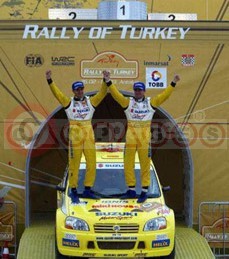 Suzuki's Ignis Teams dominate the rally winning 11 out of the 18 stages.

Spanish Suzuki Ignis Super 1600 driver Salvador Canellas has chalked up the car's best ever result in the Junior World Rally Championship by finishing second in the Rally of Turkey.

"I am very very happy to have achieved this for Suzuki," said Canellas. "The car has put up an incredible performance and the result is a tribute to its strength. We had no real worries throughout the event and consequently we were able to climb up the leader board. I hope this is the start of many other good results for us this year."

Canellas drove with his head as much as his right foot through the rough and rutted conditions of Turkey. On Sunday he suffered a minor brake problem which was fixed at service but had no other mechanical mishaps.

This was despite a rally which many top drivers described as rougher than the African Safari! In the end, only seven of the original 22 starters finished - including two Suzuki Ignis!

Finland's Ville-Pertti Teuronen made it two Suzukis in the top six thanks to an excellent fourth place finish. He had no problems at all on the final day apart from a loss of braking power on the penultimate stage.

This meant that he was able to drive carefully ensuring that the car made it to the finish. On Friday the Finn was given a four minute road penalty for a tyre change that was carried out in a non-permitted area. Without that he, too, would have been on the podium.

However, Teuronen was happy with his result saying "The further I drove the more I got used to the extreme conditions. The final day was all about getting to the finish and I knew I had to be very careful. It's been a tough three days but I'm delighted to finish and score points."

Daniel Carlsson, who led the event so spectacularly over the opening two days with an unrivalled nine fastest stage times was forced into retirement on Sunday's second stage with steering failure after hitting a rock. After the disappointment of losing the lead on Saturday he was determined to regain it so drove flat-out to maximise his chances. He won the opening stage convincingly but hit trouble eight kilometres into the second.

Carlsson explained: "Our tactic today was to go absolutely flat-out to try and get the lead back and win. Unfortunately, we hit a rock on the second stage and there was nothing more we could do. However, that's history and now I'm just looking forward to the next rally!"

Team manager Risto Laine was pleased with Suzuki's performance although he reflected: "Above all, we were a bit unlucky. It was clear once again that the car has the strength and the pace to win. There are a lot of very big positives though and the biggest one, apart from Salvator's second place is that is that 12 out of 18 stages were won by a Suzuki. We're very proud of all our drivers and of the Ignis, too, which has stood up brilliantly to everything Turkey could throw at it!"

Results of the Rally of Turkey, round two of the Junior World Rally Championship:

Next Round : Greece - The Acropolis Rally, June 5-8. Conditions are going to be similar to Turkey but much hotter.