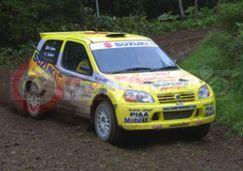 While Suzuki Sport drivers Yutaka Awazuhara and Nobuhiro Tajima were unable to complete the rally, they set fastest time in the under 2-litre two-wheel-drive class for each of the event's three days. This performance highlighted the performance of the Suzuki Ignis Super 1600.

Living up to his nickname 'genius', Awazuhara won in the two-wheel-drive competition for the first two days. Unfortunately, he was then forced out with a gearbox problem early on the third and final day.

The team found some concession in the final-day performance of Tajima. Frustrated after retiring with a niggling electrical problem on each of the first two days, he returned for the third leg. Like his team mate on the previous two days, Tajima won in his class on the leg and he was able to set fastest times in all stages.

That effort was rewarded by three Asia-Pacific Rally Championship points in the 2-litre Cup Class, which Tajima and Suzuki continue to lead.

"It has been a hard rally for us," said Tajima, "but one of our cars has finished each day, and through that we have gained much data that will be very valuable for future development."

Neither driver has competed in a major Japan rally in recent years, and Hokkaido also marked the home debut of the Suzuki Ignis Super 1600 rally car. The challenges posed by the event highlight the special demands of rallying in Japan.

The team is delighted to have supported the development of rallying in Japan through contesting the Hokkaido event, and is looking forward to returning in the future to score a bigger result.