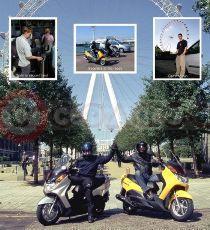 It was the sort of challenge I like. Could a learner-legal 125cc scooter, observing all legal road speed limits, get from Brighton to London quicker than a car or the train? I was by no means confident that we'd even beat the car, let alone the train. After all, there's 33 miles of fast dual carriageway and motorway between Brighton and London and I knew that sleek and good-looking though it is, Suzuki's Burgman 125 would only just crack the legal limit in favourable conditions and was much happier cruising at 60-65mph. Would its undoubted traffic-busting ability across South London make up for the slight disadvantage on the open road? I wasn't sure.

At ten o'clock sharp myself and Two Wheels Only journalist Jim Bowen on another Burgman 125 pulled away from Brighton pier followed by our road-going rival Terry in a 1.9TDI Renault Scenic and Brian in a cab heading for the station to let the train take the strain. Who would be first to the London Eye?

Making good use of the twist-and-go scooter's nimbleness, we were out of Brighton and on to the A23 within ten minutes and soon buzzing along at 60-65mph. The steep climb through the bends near Bolney saw us briefly slow to 50mph but within half an hour we'd reached the Gatwick exit. I was expecting Terry in the Scenic to come cruising by at any minute, but we made it to the end of the M23 with 40 minutes gone and still hadn't seen any sign of him. Excellent! I knew he had no chance of staying with us now, as we whistled passed the queues of cars in Coulsden and Croydon.

After exactly one hour, we'd reached Streatham Common and were heading for the day-long bottleneck where Streatham High Road meets Mitcham Lane. It's tough to find room to squeeze through even on a bicycle, and as our speed slowed to walking pace I had serious doubts about beating the man on the train. The traffic eased as we headed up Streatham Hill and across the South Circular, but then we were stopped dead again in Brixton's choc-a-block traffic.

We made our way through to the Oval, up Kennington Road and on past the Imperial War museum. I thought we might actually crack the 80 minute barrier until we got held up for what seemed like an age at the lights under the tracks of Waterloo station. Thank goodness the train from Brighton goes into Victoria! Around the derelict GLC extension, left into Chichely Street and we'd made it. Brighton Pier to the London Eye in one hour and 23 minutes on a pair of learner-legal, twist and go scooters. Best of all, there was only the photographer to greet us.

Time For A Spin

There was no sign of train-traveller Brian. In fact by the time he turned up over half an hour later, we could have done a complete 'flight' in the Eye, and I wish we had, especially since we could have parked for free in the 'solo motorcycles only' parking space opposite. And even at £10.50 for a ride on the Eye and £4.22 for our petrol, it would hardly have cost more than the £14.10 for the train and tube fare from Brighton. But Brian caught a £5 cab to the station as well, otherwise he would have missed the 10.20 am train. Whichever way you look at it, we saved a lot of time and money with the scooter!

Not So Scenic In The Car

As for Terry in the Renault, he finally arrived, completely exasperated by the traffic, after two hours and ten minutes. The on-board computer told him he'd averaged 45 miles to the gallon of diesel at 24.5 mph - slower than a Tour de France cyclist! If we'd done the comparison in the rush hour, he would have been even further behind. The little Suzuki, meanwhile, had averaged 65mpg and 38mph. If it hadn't been running flat out for more than half of the 53 miles, I'm sure it would easily have bettered 70mpg. It wasn't designed for thrashing down motorways, but it proved remarkably versatile anyway. As an urban and suburban commuter, it's hard to beat, especially since it has enough space in the cavernous underseat compartment to take a briefcase or two full-face crash helmets.

All you need to get on the road with a UH125 Burgman is a CBT certificate and £2,899; even insurance is subsidised until the end of December with premiums from £59 for third party fire & theft cover on a 50cc scooter for up to four named riders! The "Baby Burgman" also comes with a two-year unlimited mileage warranty, free Alphadot security marking and free AA roadside assistance for a year. There's no doubt about it, it's time to let the twist and go scoot take the strain!