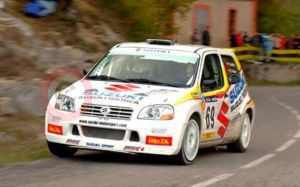 All four Suzuki Ignis Super 1600 cars finished in the top six of the Catalunya Rally, the penultimate round of the Junior World Rally Championship.

It is the first time all the Suzuki's have been at the finish of a JWRC event since Suzuki started to contest the Championship in 2002 and the result clearly demonstrates the reliability of the Ignis and is a tribute to the dedication and skill of the drivers, engineers and all team members.

Catalunya - with almost 250 stage miles [400 km] - is the fastest asphalt rally of the entire World Rally Championship, and it was made even more difficult this year by uncertain weather. Heavy rain during the final day meant that the Junior World Championship runners struggled to control their cars, which have only two-wheel drive compared to the four-wheel drive World Rally Cars.

Suzuki's team manager Risto Laine said that the result had given all in the team great satisfaction especially since the event is one of the most demanding for the cars and their drivers.

"From our point of view the most important thing is that four cars reached the finish, a very big achievement given that the competition is now so strong".

"Overall this result proves that the Ignis is now incredibly reliable, a major key to success in rallying. The cars have also shown - once again - that they are very competitive. Mind you, the event was not entirely incident free as Salvador had a gearbox problem on Saturday and we chose the wrong tyres for the wet on Sunday, but it is still more good news for Suzuki" Risto Laine said.

The next and final round of the Junior World Rally Championship is the Rally of Great Britain in Wales from November 7 to 9.

The battle for the championship will continue there as Salvador Canellas has to set out to score a minimum of seven points more than Renault driver Tirabassi to win the Championship, perhaps not a vain hope as the result of this event is always very unpredictable due to weather conditions and the varied and demanding nature of the stages.