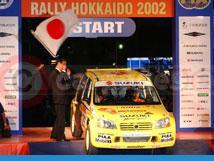 Suzuki Sport drivers will help make history over the next three days as they compete for class honours in Japan's first ever international rally.

Held on the northern island of Hokkaido, the event is the fourth round of this year's Asia-Pacific Rally Championship. It has attracted more than a dozen top overseas drivers, as well as the best of Japan's own rallying talent.

Suzuki is supporting the event by entering two Suzuki Ignis Super 1600 cars in the 2-litre Cup class. They will be driven by Nobuhiro Tajima and Yutaka Awazuhara, and will run under the banner of Tajimia's Suzuki Sport company, which is contracted to undertake Suzuki's motor racing activities.

Tajima, the defending Asia-Pacific 2-litre Cup champions, leads the class in the 2002 series. He is the top-seeded 2-wheel-drive driver for the rally, carrying number 8 on the side of his Suzuki Ignis Super 1600.

After contesting the first three Asia-Pacific rounds as the sole Suzuki Sport entry, Tajima is delighted to have the support of Awazuhara in a second car, and is proud to be representing Suzuki on his and the company's home rally.

"This is a dream come true, seeing Japan host its first international rally, and to be a part of it," said Tajima. "It is also wonderful for Suzuki Sport to be running two cars, and giving our home fans their first chance to see the Ignis Super 1600 in action.

Like Tajima, who has made his international reputation with class wins at world championship level and outright success at the famous Pikes Peak Hillclimb in the United States, Awazuhara is a legendary driver in Japan.

Going by the nickname 'genius Awazuhara', his past achievements include eight Japanese rally cross championships. Last year he scored a class win at Pikes Peak driving a Suzuki Grand Vitara Pikes Peak Special, but Hokkaido marks his return to rallying in Japan after a three year break. He is seeded 23rd, and second in class behind his team mate.

The Hokkaido Rally runs over gravel roads in the south east of the island, and is based in the town of Obihiro. It comprises 20 special stages, all gravel, totalling almost 270 kilometres.

The event is the first of three northern-hemisphere rounds of the Asia-Pacific Rally Championship. The series has already taken competitors to Australia, New Caledonia and New Zealand. Following Hokkaido, it will conclude with rallies in China and Thailand.