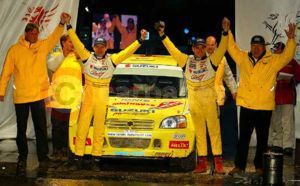 In an almost faultless display the Suzuki Team's four Suzuki Ignis Super 1600 drivers once again demonstrated the exceptional reliability and astonishing performance of their cars and the amazing progress made by Suzuki in the development of its rally programme after just two years contesting the JWRC.

Led by Carlsson, no fewer than three Ignis Super 1600s - out of just six cars in total - made it to the finish with Ville-Pertti Teuronen and Salvador Canellas third and fourth respectively.

The result in Wales means that Canellas finishes the 2003 season second overall - and only two points behind the winner - in the 2003 Junior World Championship, with Carlsson an overall third, Aava [who retired on Sunday morning with drive shaft failure after a strong fight throughout the first two days of the event] fourth and Teuronen sixth.

Suzuki's 2003 results - which have included an overall win in Finland and six other 'podium' positions - are the perfect 'curtain raiser' for the Ignis Super 1600's challenge for the Junior World Rally Championship in 2004 when the all new rally car, based on the new Ignis 5-door hatchback, will contest the series which starts with the Monte Carlo Rally from January 22 to 25 says Team Manager Risto Laine.

"We're very happy to have scored our second win of the season at what has been a very successful year. We've had seven rallies, two wins and six other podium finishes so we can't complain and, whilst it would have been nice to have won the Championship, the event by event results speak volumes about the strength and reliability of the Ignis and the talents of its drivers." Risto Laine said.