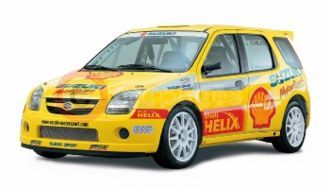 It was the first proper taste of the 2004 specification Ignis for Suzuki’s four drivers – who include rising British Star Guy Wilks – and it followed a brief shakedown run in the UK two weeks ago.

The test took place in the French Alps on two stages, close to the town of Gap, using similar roads to those found on the rally. Each driver completed approximately 120 trouble free miles encountering a variety of weather conditions.

Monte Carlo, the oldest rally on the World Championship, is also the most unpredictable event of the season. A single stage can contain wide variations of surface and temperature with luck sometimes as much of a factor as it is for the gamblers in the famous Casino.

The objective of the Suzuki drivers throughout the test was to find a good base set up for their cars for the three-day event and all are now confident of their new cars’ performance on the season-opener. They also tried out the range of tyres that will be used on the event.

On the first day the drivers encountered rain, snow and ice whilst the second day was mostly dry. Both stages were used on each day enabling drivers the opportunity to sample fast roads and slower and more technical sections to be experienced.

In the final build-up to the start, the four cars will now be re-prepared at the Milton Keynes based Team’s local workshops near to Monaco. The cars next see action at the official shakedown on Thursday afternoon [22 January] followed by the Ceremonial Start outside the famous Casino on Thursday evening at 1830 hrs [local time].