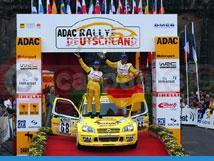 Suzuki Team Ignis are celebrating Niki Schelle's storming third place on the Rallye Deutschland. The car's speed and reliability assured the team of a podium finish on only their fourth World Championship event, the best result that an Ignis has ever recorded on a brand new event in the World Championship.

As well as a podium placing in the Junior World Championship event, Schelle also recorded Suzuki's first fastest stage time. To prove this was no fluke he also chalked up two second fastest and a third fastest time on Sunday's demanding stages as well.

"This result means a lot," said Schelle. "It was a privilege to give Suzuki their first ever podium finish and fastest stage time, but this is no less than the entire team deserves. They have approached the Ignis project with professionalism and dedication from day one, and this result is proof that the hard work is paying off."

The third and final day of the Rallye Deutschland was entirely different to the two preceding legs with narrow, fast and flowing stages, providing a stern challenge to all the crews that remained in competition.

Schelle came under pressure during the afternoon, when erstwhile category leader Francois Duval dropped behind him after an 'off' in his Ford Puma. Duval was determined to go flat-out, but Schelle and his Suzuki were able to absorb the pressure from the charging Ford. It ended when Duval retired on stage 21, so Schelle could back off to ensure an excellent finish.

"It wasn't easy and I had to concentrate very hard," said Schelle. "It would have been simple to make a mistake and go off. But me and my co-driver, Tanja Geilhausen, put our minds to work. The car worked perfectly all day I cannot praise it highly enough."

Schelle built up his speed from the opening leg of the rally, where he finished sixth overnight in the Junior category despite a brief 'off' which bent the door sill. The first day was run through narrow and slippery vineyards which Schelle said he enjoyed the most. The second day was run through the rough and dirty Baumholder military ranges, where Schelle's combination of speed and caution netted him fourth overnight at the end of the leg - plus a fastest stage time. On the third day he consolidated his advantage to finish on the podium.

His was not the only Ignis to reach the finish: The Suzuki Ignis of Japan's Kazuhiko Niwa completed the event undamaged and ninth in the Junior World Championship standings after an excellent and consistent drive.

The only Ignis not to make the finish was that driven by Finland's Juha Kangas. After a promising start on leg one, where he finished 11th in class, he rolled out of the rally on the first stage of leg two.

Suzuki introduced two new technical innovations for the Rallye Deutschland: shorter gear ratios (to give better torque and acceleration) and a revised exhaust manifold (to produce more power). These worked well, and will be carried over to Suzuki's next World Championship event the Sanremo Rally in September.

Suzuki Motorsport team principal Nobuhiro "Monster" Tajima said: "We are very pleased with this excellent result. The car did not have a single mechanical problem throughout the rally, and this is very encouraging for the future."