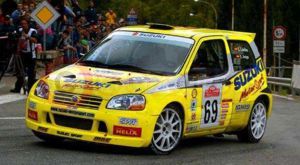 The Suzuki Ignis Super 1600 of Salvador Canellas finished second in last weekend's San Remo Rally, the latest round in the Junior World Rally Championship, after a fast and consistent drive during all three days of the particularly competitive tarmac event. The remaining Suzuki of Ville-Pertti Teuronen was fourth after another excellent drive, this time on unfamiliar surfaces.

Unfortunately two of the Suzuki entries were unable to make the finish. Daniel Carlsson was forced to retire when in second place on Saturday after hitting a rock on the opening stage of the day, whilst a broken drive shaft on the final stage of day one forced Urmo Aava into retirement.

The rally developed into an exciting last minute showdown during Sunday's final two stages, with drivers determined to make the most of their last opportunity to make up time after the first two had to be cancelled.

Conditions were especially challenging, and the JWRC drivers struggled to keep control of their two-wheel drive cars as rain poured down.

Other than for this last minute downpour the event was run in dry conditions although competitors had to deal with fog on the opening day, which made conditions even more treacherous. The mountain roads used this year were typical of San Remo with tight, twisty sections as well as several narrower stretches.

Despite the retirements Suzuki's Team Manager, Risto Laine, was well pleased with the result.

"Salvador deserves all our congratulations. He did an excellent job and, as always, was there at the finish. Ville-Pertti also drove a great rally under difficult circumstances.

"It's a pity we couldn't get more of our cars to the finish, but we certainly learned a lot for the next round where conditions should suit us better." Risto Laine said.

The next round of the Junior World Rally Championship, the sixth, takes place in Spain, on the Catalunya Rally, from October 24 to 26. The tarmac stages are wider and more flowing than those in Italy, but the competition will be just as tough. Suzuki's Salvador Canellas is looking to do particularly well as this is his home event.