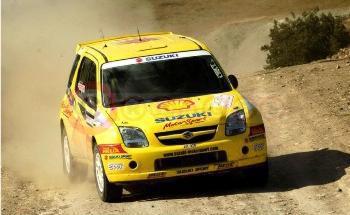 All 3 Podium Positions And 5 Out Of The First 6 Places!

The 2003-specification Ignis of Urmo Aava came home fifth, while Mirco Baldacci finally finished sixth – having led from the first day of the rally.

The Rally of Turkey, round three of the Junior World Rally Championship, was characterised by rough roads and extremely hot temperatures, making it one of the toughest tests of the year. Sharp rocks meant that punctures were a constant risk, while the demanding roads meant that only eight of the original 20 starters managed to finish with five of them Suzukis, the same number that started the rally, underlining both the speed and the reliability of the Ignis.

The Suzuki Ignis teams in action:

P-G climbed a steep learning curve on the Turkish Rally and was overjoyed to emerge at the front after a challenging three days. The young Swede showed impressive maturity to build up his speed gradually and not take any risks. His plan to stay out of trouble worked perfectly, and he was helped by the exemplary reliability of his car.

He said: "I'm very happy to win the rally with the car intact and score my first JWRC victory! I've been happy with my speed in the car, but the priority for me on this rally was to get to the end and score points. I'm very pleased that we've been able to achieve this in such a successful way."

Last year's Turkish Rally winner completed an impressive run through the stages to end up second overall. He was in a position to challenge for the lead since the start and consistently achieved exceptional times. He, too, suffered with punctures on the second day, but otherwise his Ignis remained perfectly reliable.

Guy, who won the Acropolis Rally, started Turkey full of confidence and this showed in his immaculate drive to third place overall, despite going off in a dust cloud on the Friday night superspecial after being unfairly paired against a World Rally Car.

His Ignis was damaged and he dropped a further couple of minutes in road penalties on day two when he stopped to secure a loose sump guard. The final day was much better and he steered clear of trouble in order to ensure that his Suzuki reached the finish in a safe podium position.