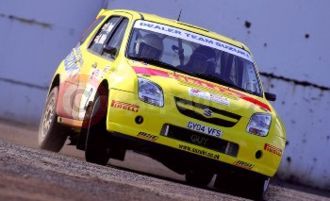 Dealer Team Suzuki was the star of the show as it launched its 2004 Kwik-Fit/ Pirelli British Rally Championship campaign at the BRC Live! at Bramcote Army Barracks, Nuneaton on Sunday, 21 March.

Head raced around the mile-long stage, co-driven by Wilks, and described the Ignis as the car to beat in the Super 1600 class of the British Rally Championship.

Rally TV presenter Head, who will front the BRC’s coverage on Channel 4 said: "The Ignis is a great car to drive with a fantastic engine giving good power and was a thrill to drive.

"The gearbox is strong and the overall package is one all other cars in the Super 1600 class will want to reach."

Wilks, who in addition to his BRC Campaign is competing in the Junior World Rally Championship in the Ignis with co-driver Phil Pugh, was happy with the performance of the car during the BRC Live! Event.

Said Wilks: "The Ignis performance on the stage at Bramcote was great and I’m really looking forward to the start of the British season.

"We’ve got some important testing in the next few weeks as we prepare to stake a claim for both the British Super 1600 Championship and Junior World Rally Championship."

The first full round of the British Championship – the Pirelli – takes place in North-East England from 23-24 April. The event is based in Gateshead with most of the stages in and around Kielder Forest.