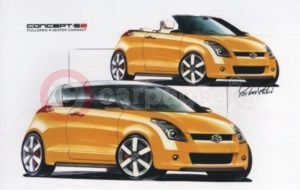 Suzuki Motor Corporation is to exhibit an exciting concept for a 4-seat cabriolet version of its next 'A' sector model, which will be produced at its plant in Hungary from late 2004, at Frankfurt Motor Show next month [September 9].

Named Concept S2, the cabriolet is a companion study model to Concept S, the 3-door hatchback which was first shown at the 2002 Paris Motor Shaw and widely acclaimed at that time. It is designed to appeal to the female customers that Suzuki will target with this new 'A' sector model range.

Unlike competitor models with a retractable power roof - which are which are unable to accommodate passengers in the rear - Concept S2 utilises Suzuki's unique and versatile stowaway hardtop roof, first seen on the Suzuki Cappuccino, to create satisfactory interior space for the driver and three passengers.

New Ignis JMIRC car for 2004 Suzukis all new Ignis Super 1600 rally car will also be announced at the Frankfurt Show. It is based upon the all new Ignis 5-door hatchback, also produced in Hungary, that will be on sale in the UK in late September. The new rally car, which will compete in the Junior World Rally Championship in 2004, utilises similar technology to that of the four Ignis 3-door Super 1600 cars currently contesting the 2003 JWRC. This current car was the winner of last week's JWRC round in Finland and Suzuki is currently in second, third, fourth and ninth place in the championship. The new car benefits from a number of improvements in output and torque which increase from 158.8kW [216ps] to 162kW [220ps] at 8,500 rpm and from 186Nm [19kg-m] to 191Hm [19.5kg-m] at 7,250 rpm respectively.
Published : 31/08/03 Author : Melanie Carter