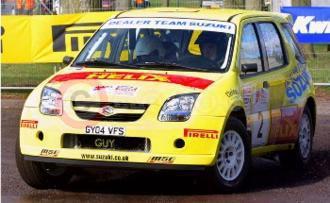 Dealer Team Suzuki makes its competitive Kwik-Fit/Pirelli British Rally Championship debut on Friday/Saturday, 23/24 April at the opening rally of the 2004 season – the Pirelli International Rally, based in Gateshead, Tyne & Wear.

And its driver Guy Wilks (Darlington) and co-driver Phil Pugh (Tywyn, Gwynedd) are confident they will be challenging for victory in the Super 1600 class in their Suzuki Ignis. "The Pirelli International is a rally we know well and we’re confident of making the most of our knowledge of the stages. The most important thing is to finish our first event and score points and with a bit of luck we’ll be near the top of the leader board on Saturday afternoon."

North-east born Wilks, 23, is hoping local fans turn out in huge numbers to cheer him on. He said: "To start off the British season in my native North-East is something I’m really looking forward to. Last year Phil and I made a great start to the season on the Pirelli International and we’re focused upon another good start this year."

This year Wilks and Pugh are in a totally different situation as they have graduated from privateer ranks to Suzuki’s dealer team, which is a fully-fledged, manufacturer- sponsored effort. With Britain’s top rally drivers Colin McRae and Richard Burns currently sidelined, Wilks is now seen by many as Britain’s leading British driver.

"It’s every young driver’s dream to work for a manufacturer and I couldn’t be in a better situation than with Suzuki, as it is as ambitious for success as I am. Being the only manufacturer-supported team in the British championship we will get a lot of attention but our job is to make a solid start and score Super 1600 class points."

Wilks and Pugh caused a stir last year when against all odds they led the Pirelli International after the first day in an under-powered car and have not ruled out a similar upset. "It will be difficult to compete with the bigger and more powerful WRC cars, but Phil and I are confident we can give them a very close race if the conditions suit us."

The duo, who have been together for 15 months, are also competing in the Junior World Rally Championship and co-driver Pugh hopes the British Championship events will help them get the best out of their Ignis. Said Pugh: "The more time we spend in the car together on events, the more we learn about each other and the car."

Dealer Team Suzuki unveiled the 2004 5-door Ignis rally car to the British public at the BRC Live event in March, and according to Wilks, the car handled the short stage very well. "The engine and gearbox on the Ignis are very strong and I grow more and more confident in the car each time I drive it. Phil and I have a great team behind us and with the Ignis looking strong we are confident of a points-scoring start to the 2004 campaign."

The Pirelli International Rally starts on Friday, 23 April in Gateshead and finishes on Saturday, 24 April, with most of the stages taking place in and around Kielder Forest.