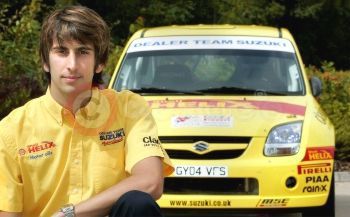 Dealer Team Suzuki is giving Briton Leon Pesticcio the biggest break of his career by replacing regular driver Guy Wilks in its Super 1600 Ignis with the 23-year old for the Trackrod Rally round of the 2004 Kwik-Fit/Pirelli British Rally Championship on 2/3 October. Wilks has been forced to miss the Yorkshire event due to his involvement in the Italian round of the Junior World Rally Championship the same weekend.

Pesticcio (Bridgend, South Wales) has a good pedigree in the British Super 1600 class, finishing second in the 2003 championship, but mechanical failures have cost him the chance of repeating that success in 2004.

He said: "I’m delighted to have been given this opportunity to demonstrate my ability in the Ignis, as it has proved to be the fastest Super 1600 car in this year’s championship. Dealer Team Suzuki is the most professional team in the championship and I’m going to give it my best shot."

He said: "Leon has been one of the fastest non-Suzuki drivers in this year’s Super 1600 British Championship, so we’re delighted to have him in our car. Leon isn’t in a position to challenge Guy for the drivers’ title, so he is the perfect choice to help us in our quest for the drivers’ and teams’ championships."

The 23-year-old has been rallying for six years, including stints in both Group N Mitsubishi and Fiat Punto Super 1600 cars. In 2003 Pesticcio won the Super 1600 class of the Tempest Rally to confirm his second place in the Super 1600 Championship.

In 2003 Pesticcio won class honours in the Red Kite Rally driving in the Peugeot 206 Winter Cup, to follow up his overall victory in the event in 2002 when driving a Group N Mitsubishi.