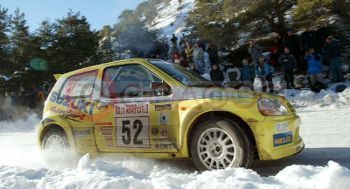 Suzuki are celebrating a well-deserved finish in the 2003 Monte Carlo Rally, the renowned and respected event that starts the Junior World Rally Championship calendar.

Urmo Aava and his Ignis Super 1600 finished fifth in the three day mountain contest which covers 864 miles [1390 km], 258 [415 km] of them on special stages, locked in a constant battle against varied weather conditions which forced all competitors to walk a thin line between commitment and overconfidence.

The event had begun in a particularly positive manner for the Suzuki Ignis teams with Daniel Carlsson dominating the first leg and leading the event at the end of the first day by over a minute, having won four of the seven stages, only to face disqualification for arriving late at Parc Ferme due to a delay on the road section after being stopped by the police for exceeding a speed limit.

At the finish Aava said that he was delighted to complete such a competitive event especially since it was his very first asphalt rally. Sadly his remaining two colleagues were not so lucky.

Salvador Canellas was lying 10th when a drive shaft broke on stage 12 whilst Ville-Pertti Teuronen found stage 13 particularly unlucky when, lying fifth, he came off the road and struck a rock, damaging the suspension too badly to continue.

Team manager Risto Laine was happy with the performances of the Suzukis at the end of the three days. Only one car suffered from a mechanical problem, and overall they clearly showed their winning potential.

Laine said: "Daniel Carlsson's performance on the opening day with four fastest times - more than any recorded by any other JWRC car throughout the rally - showed that the Suzukis have what it takes to win. We are pleased and surprised by the performance of the car and we look forward to the next step."

The President of Suzuki Sport, Nobuhiro "Monster" Tajima, was also pleased by the potential displayed by the Suzuki Ignis, although he was disappointed that only one car made the finish. "Still", he said, "we have a lot to be pleased about as clearly the car is now capable of winning stages and rallies and we hope to demonstrate this again when we contest the next round in Turkey."

The next round of the Junior World Championship takes place at the Rally of Turkey, from February 26 - March 2.