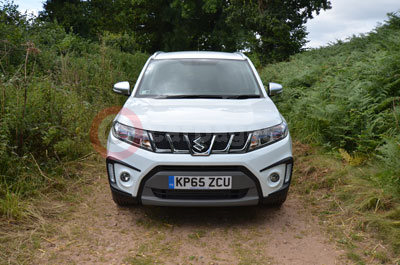 The new Suzuki Vitara range made its UK debut in April 2015, we have already tested it back in February 2016 and we were more than happy with it.� In fact, it is really rather good but it faces tough competition from the likes of the Nissan Qashqai and X-Trail.

In January 2016 Suzuki introduced a new edition to the Vitara range in the guise of the ‘S’ model - a sports orientated model. With this model being available with their new 1.4-litre petrol BOOSTERJET engine which on the face of it sounds all wrong in what is essentially an SUV with four-wheel drive.

Vitara’s for the European market are built not in Japan but at Suzuki’s plant in Magyar which is in Hungary, it also builds the Swift and S-Cross models.

We tested the Suzuki Vitara 1.4 BOOSTERJET S powered by a 1.4-litre 140PS petrol engine mated to a 6-speed manual gearbox which at the time of testing was priced at £20,899 plus £430 for the Cool White Pearl Metallic paint finish.

The ‘S’ model only comes with the petrol 1373cc 140PS Direct Injection Turbocharged BOOSTERJET engine, which offers 41 percent better spread of torque, 17 percent more power, and a four percent improvement in fuel consumption over the 1.6-litre petrol that we had tested before.

There is the option of a six-speed manual or automatic transmission, we tested the manual version.

Unlike the 1.6-litre petrol this new engine does not feel underpowered - we did find with the 1.6-litre that Devon hills required a few down changes to make progress - however with this turbocharged unit you can make respectable progress - even on the motorway you can leave it in sixth gear and it remains very responsive at motorway speeds.

There is some turbo lag but, to be honest as long as you keep the revs up, it is surprisingly nippy.

These figures like every manufacturer are optimistic and as testing is done in a laboratory they do not match real world consumption. On our mixed test route, we were achieving approximately 42.4 mpg urban which increased to around 52 mpg on the motorway - so not too far off Suzuki’s figures.

It does feature stop/start technology which if like us you have a hatred for, can be switched off but it is not too intrusive, unlike some systems.

The ‘S’ model features Suzuki's ALLGRIP four-wheel drive system which offers four driver-selectable modes enabling you to choose the mode that best suits the road conditions. Auto mode uses 2 wheel-drive by default and switches to four-wheel drive when it detects wheel slip. Sports mode makes use of the four-wheel drive system under more dynamic driving conditions optimising engine response and cornering performance. Snow mode is optimal for snowy, unpaved, and other slippery surfaces - the system uses four-wheel drive by default improving stability on low friction surfaces. Lock mode does exactly what it says and locks the system so that the pulling power is distributed to all four wheels. This works at speeds of up to 40mph, above which, it reverts to 4WD-Auto.

Overall the 1.4-litre BOOSTERJET engine makes a vast difference to the Vitara - especially if you want a petrol engine over a diesel with petrol engines tending to be quieter and cleaner.

This is a 5-year+ news article, from our Suzuki archive, which dates back to the year 2000.

If in doubt check with your local Suzuki dealer as car prices and technical data will have changed since 2016.

Suzuki Vitara S Images may not be UK specification cars. Colours and exterior and/or interior elements may differ from actual models.