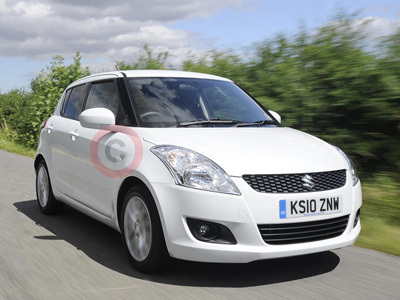 In a UK media first, Suzuki GB will be recreating the new Suzuki Swift TV Advert live at Westfield Shopping Centre on 31st August 2010. The Suzuki Swift event, which will be on throughout the day at the shopping centre, will be streamed live to transvision screens at major railway stations around the country as well as landmark specific screens at various locations in London. The event will also feature on You Stream, recreating the advert which is currently being aired.

The creative for the TV Advert reflects the new Suzuki Swift marketing campaign: Designed for Life. This creative features in Direct Mail, TV, Press, Online, EDM and Outdoor national communications. A microsite is also now live where information can be found on the all new Suzuki Swift.

The artists from the advert, Josh Sutterby (aka Alfa) and Richard Henderson (aka Discoteck) will be at Westfield from 4pm recreating the illustrations that were created exclusively for Suzuki for the launch of the new Suzuki Swift on 1st September 2010. Alfa is well known for his instantly recognisable graffiti-art based characters and also his work with the underground drawing battle, Secret Wars. International artist Discoteck is a veteran from the live art scene and has been involved in Secret Wars since it first started. He has also collaborated with leading fashion and sportswear brands.

There will be live music and a free prize draw running throughout the day in The Atrium where visitors can win 2 pairs of VIP tickets to the prestigious MTV EMAs in Madrid on 7th November 2010. The prize includes 5* accommodation and an exclusive after party invitation. There is also the opportunity to win a prize from a list of incredible tailored experiences, including a trip to an Ice Hotel in Sweden.

The New Suzuki Swift will be available as a three and five door in three specific grades which are SZ2, SZ3 and SZ4. Zero per cent finance is available from launch, payable over three years and requires a 50 per cent deposit.

Unmistakably an evolution of its predecessor, the new Suzuki Swift is even better in the ways that count most: more fun to drive thanks to exhilarating, sporty handling as well as being more attractive to look at thanks to a more sophisticated sporty modern design. It's an even clearer reflection of Suzuki's desire to offer a sports compact that is perfectly suited to the lifestyles and demands of today. New Suzuki Swift is more economical than before with fuel consumption on the combined cycle now 56.5mpg for the manual transmission model, an improvement of 7.8mpg over the previous 1.3-litre unit. Emissions are much lower; the new 1.2-litre engine produces just 116g/km on the combined cycle; representing a 17 per cent improvement over the previous 1.3 Suzuki Swift.

This is a 11-year+ news article, from our Suzuki archive, which dates back to the year 2000.

If in doubt check with your local Suzuki dealer as car prices and technical data will have changed since 2010.