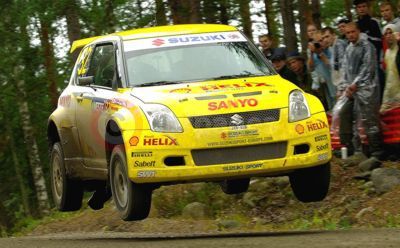 Rally Finland, round five of the Junior World Rally Championship, saw the debut of the brand new Suzuki Swift Super 1600, driven by P-G Andersson and Guy Wilks. The gravel event is well known for its high speeds and breathtaking crests: ideal territory for the new Swift, which flew in testing.

First podium for the Suzuki Swift

Unfortunately, the rally did not get off to an ideal start. Guy picked up a puncture on the first forest stage, and things got even worse when he discovered that he could not get the wheel off as the tyre was jammed against the brake calliper. He was forced to drive down the stage until he found a suitable place to change the wheel. In total, he lost nearly five minutes.

That was the start of an amazing comeback drive that would see Guy win over a third of all the stages and finish in third place overall! "After I had the problem, I knew I just had to go for it," said Guy. "Luckily, the Swift is an absolutely fantastic car. I felt very confident in the suspension and the handling and by the end of the first day I was already up to fifth. From then on I took it a bit more steadily, as I knew I had to get to the finish. The really good thing was that we were able to get quick times out of the car without even pushing especially hard."

Guy's well-deserved third place means that he now leads the championship by four points. The Englishman is also the man to have scored the most fastest stage times during the season to date.

P-G Andersson made a confident start in order to settle into a solid second place, convinced that he would soon be able to make his move for the lead. But he never got the chance. The reigning Junior World Rally Champion crashed his new Swift after getting caught out on a tricky crest on SS5 - which was new to Rally this year.

P-G's retirement meant that leader Kris Meeke, in the Citroen C2, could extend his advantage. He finished the first day with a lead of nearly half a minute over his team mate Daniel Sordo, but crashed into a telegraph pole at the start of day two. His car was repaired and he re-started on the third day under the super rally regulations, with a penalty of five minutes for every stage missed. Even with this penalty he still finished seventh, scoring two points.

Sordo [Citroen], who won the Junior World Rally Championship round in Sardinia, took the lead after Meeke's accident and eventually won on his first visit to Finland. In second place was Urmo Aava, who did a brilliant job to claim runner-up in his Suzuki Ignis. It was not all plain sailing for Urmo though: on one stage a spectator set off his external fire extinguisher just before the start! The spray did not put him off though - he went on to set fastest time on the stage.

As day two drew to a close, it looked like Aava might be able to challenge Sordo for the lead. But the Estonian's chances were wrecked by a puncture on the longest stage of the rally, which he had to stop and change.

"That was a real pity, as I think we could have fought for the win," said Aava. "Nonetheless, I have to be happy with second place, which moves me up to fourth in the championship, only seven points behind the leader. I really enjoyed the rally - which reminded me of my native Estonia - and my Ignis was perfect."

The next round of the Junior World Rally Championship is Rally Deutschland from 26-28 August.