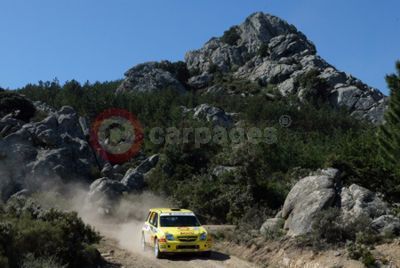 Suzuki drivers Guy Wilks and P-G Andersson have finished first and second in class A6 on the all-gravel Rally Cyprus, ending up 29th and 33rd overall respectively.

Cyprus is the sixth rally of the World Championship, and part of Suzuki's eight-rally programme outside of the Junior World Rally Championship designed to build experience and knowledge for the future.

Conditions in Cyprus were hot and rough, with several drivers comparing it to the legendary Safari Rally in Africa. Cyprus is also the slowest rally of the World Championship, characterised by sharp rocks and several tight hairpin bends. This makes it one of the most challenging events of the year, putting an incredible strain on drivers, cars and tyres. Temperatures peaked at over 30 degrees centigrade and punctures were a constant risk.

Suzuki's objective in Cyprus was to treat it as a test session for the Acropolis Rally in June, the next round of the Junior World Rally Championship that is Suzuki's main focus this year. The Acropolis is run in broadly similar conditions, although average speeds are higher and the route is more flowing.

Guy took the class lead on the opening stage and never lost it, although he was forced to stop after the opening loop of stages as the extraordinarily abrasive surfaces had shredded his tyres to the canvas. Rather than drive with illegal tyres on the road section he wisely decided to take advantage of world rally's re-start regulations, which allow drivers to have their cars recovered to service and re-start the following leg with a penalty of five minutes for every stage missed. On the second day Guy continued to set an impressive pace before hitting a large rock in the afternoon, which pushed the wheel back into the arch. On the final day, he drove carefully to the finish while testing some components that will be used in Greece.

The Englishman, currently second in the Junior World Rally Championship points standings, said: "These are by far the roughest conditions I've ever driven in: the stages are not really suited to a Super 1600 car at all. There is no way you can avoid punctures, and some of the rocks are bigger than footballs. Nonetheless, I've been very impressed by the way our Ignis stood up to the constant battering. It's nice to have another class win, but the main thing from this event is that we have learnt a lot and we're looking in good shape for Greece."

Reigning Junior World Rally Champion P-G Andersson was also affected by the extraordinarily rough conditions, dropping time with punctures on the opening loop of stages. He too took advantage of the re-start regulations to re-join the event on the second day, but unbelievably hit the same rock as Guy on the second afternoon. This forced him to stop and make suspension repairs by the roadside, costing him a lot of time.

Team manager Risto Laine reported: "From the beginning it was never our plan to go flat-out, as these are the cars we will be using for the Rally of Turkey in two week's time and we wanted to keep them in reasonable condition. The roads were so unbelievably rough and it would have been easy to wreck the cars. Instead we were able to take advantage of the current re-start regulations in order to concentrate on testing some components for Greece. The Ignis has always been a strong car, and we've learnt a few things that will make it even better in the future. But on the stages where we had a clean run the Ignis was extremely fast, setting times which were comfortably within the top 10 Production Car World Championship times. The winner of the Production class here was Brice Tirabassi, a former JWRC champion in 2003, and we beat him on a large number of the stages. This was despite the fact that he had four wheel drive, a turbo and a two litre engine - while we just have two wheel drive and 1600cc!"

The next round of the Junior World Rally Championship, the Acropolis Rally, takes place in a month - but the Suzukis will be back in action in just two week's time for the all-gravel Rally of Turkey from 3-5 June.