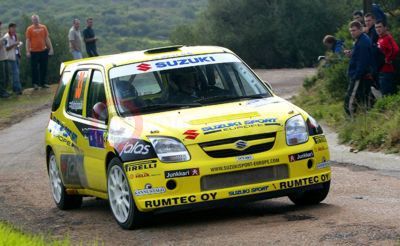 Junior World Rally Championship regulations require every crew to drop one score, and Suzuki Swift drivers P-G Andersson and Guy Wilks had nominated the penultimate round, the Tour of Corsica, as the event they would skip.

This left the way clear for the Suzuki Ignis entries to steal the limelight on this classic all-asphalt rally, one of the most specialised of the entire year. Corsica has a fearsome reputation and it is nicknamed the 'rally of 10,000 corners'. The narrow and twisty mountain roads are characterized by several changes of asphalt, making it almost impossible to judge the amount of grip available on each bend. Another complicating factor is Corsican weather, which is notoriously unpredictable. But despite some rain before the start, this year's event was mostly dry with temperatures climbing as high as 26 degrees centigrade.

The Citroen C2s started Corsica as favourites, as these cars have been specifically developed for asphalt rallies and the company has years of experience on this type of surface. Reigning World Champion Sebastien Loeb, who drives Citroen's Xsara WRC, won the event overall by taking every single stage victory!

Luckily, the battle in the Junior World Championship class was somewhat closer. The two Citroen C2s pulled out a lead as expected on the opening day, with Daniel Sordo heading Kris Meeke at the first overnight halt. Fiat driver Mirco Baldacci was third, with Suzuki's Kosti Katajamaki a highly creditable fourth.

The Finn was competing in Corsica for the first time, and decided that the best strategy would be to stay out of trouble. Despite some uncertainty about the amount of grip on the stages, and problems with his suspension bottoming out, Kosti made no mistakes at all.

His rivals were not so fortunate. On the second day, Meeke slid into a wall after braking on some loose gravel and damaged a steering arm. The 17-minute time loss on SS5 ruled him out of contention for the win and promoted Kosti to third. Then Sordo stopped with electrical problems on SS8, and Kosti was suddenly up to second, behind former Suzuki driver Baldacci.

Sordo was able to re-start the final leg with just a five-minute penalty, as he had only missed one stage. This meant that he was still third, close behind Kosti. The Finn wisely decided not to make a fight of it, and took a well-deserved podium while Baldacci won the event.

Urmo Aava was fourth at the finish, but his rally was much more adventurous. He ran as high as third but lost time with a puncture on the opening day, before he picked up yet another puncture on the first stage of day two! To make matters even worse, he had a driveshaft failure on the following stage. These problems dropped him to ninth overall, and the Estonian did an excellent job to work his way back up the leaderboard over the remaining stages.

Another man concentrating on experience was Czech youngster Martin Prokop. Despite a couple of problems with overheating brakes, Prokop came safely to the finish in seventh place, having achieved all his objectives without putting a scratch on the car.

Just getting to the finish was a good achievement in a tough rally that claimed several victims. Suzuki's Pavel Valousek rolled in the shakedown and then had another accident on day two, ripping off a wheel. The Ignis was fixed again and Valousek re-started the final day, only to stop definitively with an electrical problem after a wire came loose from the alternator: a problem probably related to his earlier accident. Renault driver Luca Betti was running in a strong fourth until the final morning when he had a puncture and lost his brakes. He went off, damaged his suspension, and stopped for good.

P-G Andersson and Guy Wilks will be back in action for the final round of the Junior World Rally Championship, the all-asphalt Catalunya Rally, from October 27-30. Daniel Sordo has an eight-point lead in the title race but the championship could still go to Suzuki Swift driver Guy Wilks…..!