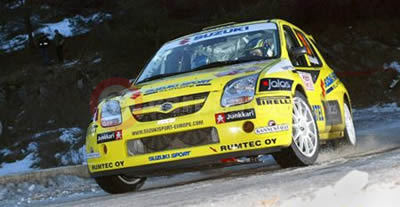 Kosti Katajamaki driving a Suzuki Ignis has finished second in the Monte Carlo Rally, round one of the Junior World Rally Championship, with fellow drivers Alan Scorcioni, P-G Andersson and Englishman Guy Wilks third, sixth and seventh, respectively. In a remarkable demonstration of reliability, six Suzuki Ignis completed the event.

The final day of the all-asphalt event was one of the toughest, including two runs over the famous Col de Turini, which once more claimed many high-profile victims. Stray patches of ice and snow meant that grip levels were constantly changing, providing a particularly tricky challenge for the two-wheel drive Junior World Championship runners.

Katajamaki’s biggest moment came on the first run when he was one of many to slide wide and hit a wall. Although he had started the day in the lead, he correctly decided that it was more important to secure a safe podium finish, and he drove carefully to the end in order to successfully kick-start his 2005 title campaign.

It was a similar story for team mate Guy Wilks. The Englishman was fourth having suffered brake problems, but went off on Saturday's final stage after sliding on ice and hitting a bridge. The Suzuki mechanics did a brilliant job to fix his car and allow it to re-start the final leg, where Guy drove consistently to ensure a points finish in seventh.

Guy commented: "These are probably the hardest two points I have ever scored in my life! What happened to me on Saturday was extremely unfortunate but at least we haven't come away from this rally entirely empty-handed. The last day was quite difficult as it's not as easy to stay motivated when you are not fighting for a top position, but it could have been far worse."

Reigning JWRC Champion P-G Andersson finished sixth after an eventful rally. The Swede was leading from the start until the last stage on Saturday, when he crashed into a wall after sliding off on some loose gravel. Under the new re-entry rules he was able to re-join the rally with a five-minute penalty and recovered to finish an excellent sixth overall. This was despite an off on SS12, when P-G smashed into a telegraph pole after finding himself with no brakes.

Suzuki Sport principal Nobuhiro 'Monster' Tajima commented: "Congratulations to Kosti and Alan who did a fantastic job to start the year off in style. But some of the biggest heroes of this rally are the Monster Sport Europe mechanics who did an amazing job under a lot of pressure to put P-G and Guy back in the rally."

The next round of the Junior World Rally Championship takes place in Mexico, from 10-13 March, but the Monster Sport Europe Suzukis of P-G and Guy will be back in action for the Swedish Rally from 10-13 February.