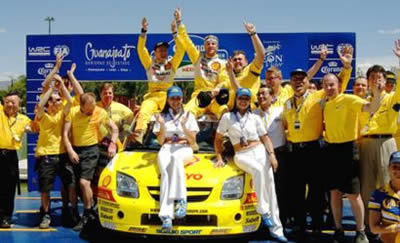 Guy took the lead on the opening stage of the all-gravel event, round two of the series. The Englishman dominated his class after setting 11 fastest stage times out of 14, finishing an excellent 11th in the overall standings.

The third Ignis of Pavel Valousek, run by JM Engineering, was fourth. Only four runners finished this incredibly tough event - and three of them were Suzukis!

The last leg of the Rally Mexico comprised just two stages, but the final test was one of the most difficult and certainly the longest of the entire rally at 44 kilometres. Weather conditions were once more hot and sunny, with the two concluding stages containing a wide variety of speeds and corners.

Guy had a scare leaving service in the morning, when his mechanics found it almost impossible to refit the sumpguard because of the heavy battering it had taken during the previous day. He picked up a two and a half minute penalty for leaving service late, but his lead was already more than 10 minutes so the time loss was of little consequence. Guy concentrated on bringing the car home safely without taking any risks on the final two stages. He eventually won by a substantial margin.

The 24 year-old said: "This rally was even more difficult than I expected. One of the biggest problems was the inconsistency of grip, meaning that it was very easy to make a mistake. When you have a big lead there is almost more pressure than when you are fighting for tenths of seconds, as you have everything to lose and little to gain. It's been a very punishing event for the car but our Ignis has been incredibly reliable and superbly strong. The only problems we had were overheating brakes - but I think that was the case for everybody. I'm absolutely delighted to be leading the championship, and my plan is to keep it that way!"

P-G rejoined the rally today thanks to the new re-start regulations, after missing the last two stages of leg two. An engine mount sheared on the day's penultimate stage and broke the sump, so P-G opted to switch off the engine and recover the car to service - picking up the mandatory five minute penalty for every stage missed. However, his margin over the third-placed competitor was so big that he was able to re-join still in the second place he had held from the start of the rally. Despite suffering from flu, P-G battled through to the finish to secure second place in the championship.

The reigning Junior World Champion said: "It's certainly been an eventful rally! From the beginning I was not feeling very well and once I saw Guy's pace I knew it would be impossible to challenge for the lead. So I concentrated on finishing second and taking the maximum points possible. I wasn't really worried about the engine problem on the second day because I knew we had enough time to fix it and still keep second place. Today was all about being careful, as it's great for Suzuki to be first and second in the championship!"

Monster Sport Europe Team Manager Risto Laine said: "All's well that ends well! This has been a deceptively difficult rally, with a lot of pressure on us. Guy did a magnificent job to stay cool, calm and collected from the start to the finish - he simply dominated proceedings without making any mistakes. It was a supremely impressive performance. P-G was really feeling ill, and to bring the car home in second is a credit both to him and our mechanics who fixed it!"

Pavel Valousek, driving an Ignis Sport run by Czech team JM Engineering, re-joined the rally on leg two under the new re-start rules following an accident on SS1. The Czech steered clear of further trouble, and was rewarded by fourth place in the Junior classification despite the damage to his Suzuki. He said: "It was a disastrous start to the rally with a happy ending. Thankfully Suzuki build a very strong car: even though the bodyshell was damaged we were cleared to re-start and against all odds I have ended up with the best Junior World Championship result of my career!"

The next Junior World Championship round is the Rally Sardinia from 29 April-1 May. But the two Monster Sport Europe Suzukis of Wilks and Andersson will be back in action before then, competing in the A6 class - and trying to beat the two-litre Group N four-wheel drive cars - on Rally New Zealand from 8-10 April.