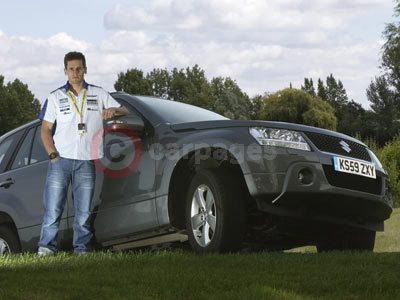 As Suzuki celebrates 25 years of the iconic Suzuki GSX-R sports bike range in 2010, its superbike racing effort both on the world and national stage sees revitalised rider line-ups. In the world series, Leon Haslam joins the Alstare Suzuki Team as their first ever British rider, while 2009 Suzuki BSB rider and honorary-brit Sylvain Guintoli makes the step up as his team mate. At home in BSB, the Worx Suzuki Team welcome back Japanese factory star Yukio Kagayama to ride alongside 2009 wild card rider and now full-time recruit Tommy Hill. While in the Relentless Suzuki by Tas camp, 2007 British Supersport Champion Michael Laverty rejoins the team to ride alongside reigning National Superstock Champion Alastair Seeley.

The Suzuki Grand Vitara has been part of the Suzuki line up for 21 years and has sold more than 2.7 million units worldwide with 174,000 units being sold in the UK. In September 2009 the Suzuki Grand Vitara range received minor changes to exterior and interior styling and also saw the introduction of the five-door 1.9 DDiS which completed the SZ range. The three door SZ range was extended in July 2009 to include the 1.6 litre petrol and 1.9 DDiS diesel engines priced from £14,900.

With safety a key priority at Suzuki, ESP is now fitted as standard across the Suzuki Grand Vitara SZ range. There are three levels of specification in the Suzuki Grand Vitara line up: SZ3, SZ4 and SZ5. Features introduced on the SZ5 model include 18 inch alloy wheels, High Intensity Discharge (HID) headlamps, electronically-operated glass sun roof and leather seats with front seat heating.

The Geneva motor show premiered some styling changes to Suzuki's highly successful three and five door Grand Vitara models with both models incorporating a redesigned tailgate without spare wheel. The new more stylish shape makes the vehicle more suitable for City driving without compromising the original lifestyle and 4x4 capability of the model. The 2010 Suzuki Grand Vitara without rear mounted spare wheel will be on sale in the UK in July 2010.

This is a 11-year+ news article, from our Suzuki archive, which dates back to the year 2000.

If in doubt check with your local Suzuki dealer as car prices and technical data will have changed since 2010.

Suzuki Grand Vitara Images may not be UK specification cars. Colours and exterior and/or interior elements may differ from actual models.