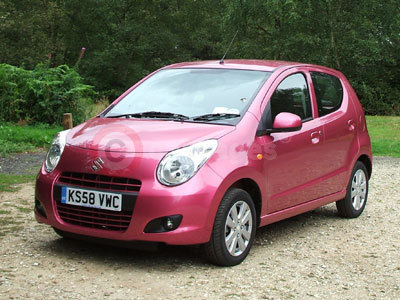 At a time when we are all supposed to be downsizing, many are reluctant to give up the perceived comfort, style and fun associated with anything smaller than mid-sized car. However, the Suzuki Alto is one that could change many a mind.

Following the latest launch in March 2009, the Suzuki Alto city-car is now in its seventh generation and celebrates it 30th birthday, having first gone on sale in the UK in 1981, two years after the Japanese launch. And a thoroughly nice car it is too.

Cute styling and a surprisingly spacious interior make it one of the best small cars on the market and the smallest that Suzuki produce. Actually, it is made in India at the Maruti Suzuki India plant, which is India's largest car-maker. However, the design work was done in Japan with a lot of European input and it shows.

Aerodynamics played a large part in the Suzuki Alto's design process from the rounded front end to the equally curvaceous rear. The 'face' has real personality with a grinning front grille and bug-eye headlight clusters. The bonnet flows rearward in a wedge shape, which is emphasised by the green-tinted windows, and then tails off in a somewhat upright tailgate.

The Suzuki Alto test car was 'pretty in pink', which although different, might not appeal to some. Fortune Rose Pearl Metallic is just one of nine available body colours. Superior White and Bright Red are the only solid colours and the curiously named metallics, such as Healing Green Pearl and Paradise Blue, add £362.50 to the OTR prices, which range between £6,795 and £8,560.

The Scrappage scheme applies to this and all Suzuki cars and runs until the £300m government money is spent or 28th February 2010, whichever is soonest.

So, not only is the Suzuki Alto cute and curvy but it is practical too. Having five doors makes a huge difference, especially to people who have small children. Having said that, the Suzuki Alto is rather TARDIS-like and in the rear of the cabin, there is ample room for adults. There are just two seats in the back, which means plenty of shoulder room and despite the deep seat squabs, legroom isn't a problem either, according to my two, 6ft tall passengers.

Suzuki Alto Images may not be UK specification cars. Colours and exterior and/or interior elements may differ from actual models.