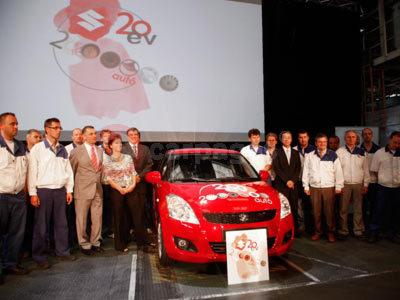 A Suzuki Swift has become the two millionth Hungarian-made Suzuki, and came off Magyar Suzuki Corporation's Esztergom plant production line with a ceremony that celebrated the two million vehicle landmark as well as the company's 20th anniversary.

Hisashi Takeuchi, CEO of Magyar Suzuki Corporation said "I feel privileged being the Head of Magyar Suzuki when this unprecedented achievement is realised, something that we can all be really proud of,"

The event was attended by representatives of the Hungarian Olympic Comittee including the President Zsolt Borkai. The "jubilee Suzuki Swift" was driven off the production line by Olympic Champions. Magyar Suzuki has an agreement with the committee which sees Magyar Suzuki provided sportsmen, trainers, sports leaders and managers with a Suzuki car fleet.