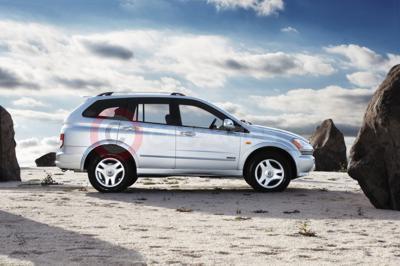 SsangYong’s model renewal moves up a further gear with the Korean unveiling of the Kyron (8th June 2005). A 4x4 crossover, Kyron has been designed by Ken Greenley, SsangYong Motor Company’s British creative director, to spearhead the company’s attack on the increasingly important Sports Activity Vehicle (SAV) market around the world. It goes on sale in the UK early next year.

SsangYong plans to export 37,000 Kyrons a year in 2006, many of them headed for Europe where the company is on track for a massive sales boost to 40,000 sales a year.

The five-door, five-seater will be available with a choice of new-generation common-rail diesel engines including a 140bhp 2.0-litre unit.

Kyron will make its European debut at the Frankfurt Motor Show in September and will go on sale through SYUK Cars’ network of 53 dealers in the first quarter of 2006.

Kyron slots in to SYUK Cars’ fast-expanding range below the Rexton 4x4, and comes hard on the heels of the Rodius seven-seat MPV that went on sale this month (June).

The Kyron was first shown as the SVR concept at the recent Seoul Motor Show.

This is a 15-year+ news article, from our SsangYong archive, which dates back to the year 2000.

If in doubt check with your local SsangYong dealer as car prices and technical data will have changed since 2005.

SsangYong Kyron Images may not be UK specification cars. Colours and exterior and/or interior elements may differ from actual models.