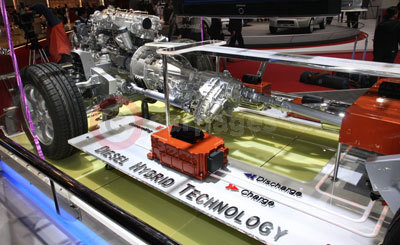 A rejuvenated SsangYong – currently being completely re-launched in the UK – has announced plans for an unprecedented raft of new models due for production over the next few years.

From 2009 through to 2014, SsangYong will invest more than 1.9 billion euros in 20 new models based on five different platforms, with five new engines and with monocoque construction. It’s possible that world-famous Italian styling house, Italdesign, founded by Giorgetto Giugiaro, will be involved, having already styled the latest Rexton model.

Paul Williams, managing director of British distributor Koelliker UK said: “I have been able to see some of the new models and although I can’t reveal any details, I’m very excited about what’s coming. It’s unlikely that all 20 will be appropriate for the UK, but it will mean a wider and more attractive range with much greater choice for customers. There will be different body styles and engines including passenger cars that will enable us to compete strongly in new market sectors.”

In the UK SsangYong is best known as a specialist 4x4, SUV and MPV manufacturer with the Kyron, Rexton and Rodius line-up starting at just £14,995. Just weeks ago, SsangYong launched a new luxury car (the Chairman) as a direct competitor to BMW and Mercedes in the South Korean market. For 20 years, SsangYong has been using engines and gearboxes made under licence from Mercedes-Benz, but is increasingly self-sufficient and ambitious, signalling a move into more mainstream cars.

It may not have been clothed in attention-grabbing sleek bodywork, but the power train and bare chassis shown by SsangYong at the Geneva show is a strong pointer to the future.

In general, diesel hybrid cars ensure a good level of energy efficiency and outstanding fuel efficiency in comparison to petrol hybrid cars. As a result, a significant reduction in CO2 and exhaust emissions can be achieved.

Hybrid technology minimises unnecessary use of fuel and the emission of exhaust gases by ensuring that a car’s engine is stopped when the car stops, such as at a red light. When a vehicle is being driven, the power of the vehicle is boosted through the e-motor to improve the vehicle’s performance. When a vehicle is slowing down and under braking, surplus energy is used to charge the battery.

SsangYong’s diesel hybrid technology applies a 30kW e-motor to an advanced direct injection diesel engine, with a 340V high-voltage battery supplying electric power to the e-motor. The Torque Split Device (TSD), independently developed by SsangYong, is also applied to combine or cut off the power of the e-motor, thereby enabling hybrid driving.

The diesel hybrid technology developed by SsangYong is a soft type. The first of its key technologies is the Hybrid Control Unit (HCU). The HCU controls the performance of key systems needed to drive a hybrid car at an optimal state, and includes a safety function for high voltage. In addition, an e-motor, motor controller, and high-voltage battery are used, along with technologies to match each of the key systems with the vehicle.

SsangYong developed and is applying independent software to control diesel hybrid cars. In particular, vital parts adopted for its diesel hybrid technology, including the e-motor, motor controller, and high-voltage battery, are significant in that they have all been developed in-house at SsangYong to ensure a standard level of performance.

According to current results, the fuel efficiency of the SsangYong diesel hybrid shows an improvement of around 25 per cent in comparison to existing vehicles of the same class. In terms of emissions, there is a reduction of around 10 per cent in nitrogen oxides and around 15 per cent in particulates. (This is the result of measuring a test vehicle during the initial development phase, and therefore does not reflect ‘normal’ driving.) SsangYong expects that the completion of the development of a diesel hybrid car will allow for the development of a diesel hybrid technology that ensures a fuel efficiency improvement of at least 30 per cent and a reduction in exhaust emissions of at least 50 per cent.

In terms of the diesel engine, the compression ratio has been reduced, the number of injection holes of the injector has been increased, and the fuel’s multiple-injection system has been applied to reduce combustion noise. SsangYong is also measuring and analyzing the source of engine noise in order to reduce or eliminate noise. More importantly, SsangYong is also focusing on ‘tuning’ the quality of tones so that harsh noise is not generated from the engine. As part of this process, SsangYong is working hard to increase the rigidity of its engines.

This is a 12-year+ news article, from our SsangYong archive, which dates back to the year 2000.

If in doubt check with your local SsangYong dealer as car prices and technical data will have changed since 2008.

SsangYong Images may not be UK specification cars. Colours and exterior and/or interior elements may differ from actual models.