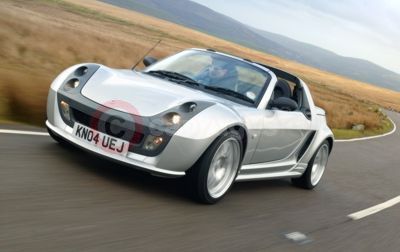 With the launch of the new Smart ForFour Brabus, the DaimlerChrysler owned company is radically altering its UK business plan for the future.

Having been in the UK now for five years Smart is broadening its model range; mainly with the ForFour, but due to demand it has secured a further supply of 400 Roadster and Roadster-Coupe Brabus models for 2006.

Announcing the stay of execution Jeremy Simpson, head of Smart in the UK and Northern Ireland UK said, "These models will have some technical and trim changes for the next year with the Roadster selling at £16,995 and the Roadster-Coupe variant at £17,295. We currently have 1,000 Roadsters and Roadster-Coupes in stock to meet customer demand for this year when 2,500 units will be sold with the Brabus versions accounting for 15 per cent of the model mix".

Simpson said, "It is ironic that as soon as DaimlerChrysler announced production of the Smart Roadster was to stop, so UK customer demand increased by 30 per cent hence our request to the manufacturer for them to extend the car’s life for us until next year. The Roadster looks as though it will become a future classic ".

He added, "The Smart ForTwo range should see sales of 5,500 units this year with Brabus version taking 11 per cent of that total. We also expect to sell 5,500 Smart ForFour models this year with new Brabus model accounting for four per cent of sales. The UK has been the world’s number one Smart Brabus market now for three years running".

Simpson added, "This year the UK market for Smart should return to being the third largest in the world behind Germany and Italy".

The news that the German distributor of Smart is predicted to give up the franchise, Simpson said he thought that if this were the case then DaimlerChrysler would take over the operation and sell the cars alongside their Mercedes-Benz operation just as it does in the UK.

Simpson also said the Smart franchise in the UK was no longer pushing to increase sales volumes to gain a one per cent market share. Outlining the change to their UK business plan he said, "We and our dealers must capitalise on the Smart premium brand qualities. UK customers pay for individuality and we have more individual models of cars to meet that need for individuality."

"We are simplifying our model line-up and simplifying the range of options we now have which customers tell us is to confusing. For instance the entry-level purestyle ForFour now has six options compared to the 57 previously available".

"We are also making it easier and less costly for dealers to operate and take on the Smart franchise. Our original plan was to have 106 dealers and after sales points in the UK but we have now reduced this to 73 points to be in place by 2007. Currently we have 56 dealers but we need to increase our representation and fill open points nationwide and we want to establish Smart outlets in smaller towns as well".

He added, "Dealers will now need three-car showrooms or showroom space rather than the six-car requirement we had before and we are considering applications from non Mercedes-Benz franchised dealers for the first time. We are able to offer our dealers better profit margins and a more financially attractive stocking plan".

"The new business plan also allows us to have new combined Mercedes-Benz and Smart pylons outside the joint dealerships so raising our brand profile. This is rather like BMW and Mini retail operations."

"Dealers will now find it more profitable and viable to hold our franchise. There has been an explosion in the demand for our used cars, which has grown by 35 per cent, and with 45,000 Smarts on UK roads there are big opportunities for used sales, service and repair work. We have the second largest owners club in the country with 22,000 members - behind the MG Owners Club but bigger than the Porsche Owners membership".

"We are also stopping our national television advertising campaigns and in future we will be spending our money with regional advertising and promotional events in areas where we have dealer representation".

Simpson said, "We have also been able to negotiate lower insurance ratings on our models. The early Smarts to come to the UK were left hand drive grey imports and due to the lack of parts and body panels to support these vehicles the initial ratings were much higher than they should have been. Now with 40,000 or so official cars on our roads, a dealer network and national parts operation to support them, insurance costs are much cheaper."

"We recently extended our ForFour range by adding two new affordable models, the £7,295 purestyle and the £8,595 coolstyle. Now at the other end of the price range we are introducing the ForFour Brabus at £17,195. "

"This newcomer is a product from the well-known Brabus tuning house. The 1.5-litre, four-cylinder petrol engine is the same core unit has used in the new Mitsubishi Colt CZT three-door but the power output has been boosted from 147bhp to 177bhp giving our car a 0-62mph time of just 6.9 seconds and a top speed of 137mph. In addition to engine changes the ForFour Brabus has a stronger Getrag five-speed gearbox, tuned suspension and bigger brakes. Brabus styling changes include 17-inch allow wheels, leather upholstery, bodystyling kit including a rear roof spoiler; twin sports exhaust and front fog lights."

Simpson added, "We do not see the Colt CZT as a competitor. Our car competes against the Mini Cooper S or Golf GTi but ours has better performance, better specification and a better quality interior. It is as much about exclusivity than about performance but if you compare the ForFour Brabus with the Cooper S our car, once the price adjustment for specification has been made, is 10 per cent better value. Our car also offers more versatile and roomy rear passenger accommodation, more load area space and better practicality."

This is a 15-year+ news article, from our smart archive, which dates back to the year 2000.

If in doubt check with your local smart dealer as car prices and technical data will have changed since 2005.

smart roadster Images may not be UK specification cars. Colours and exterior and/or interior elements may differ from actual models.