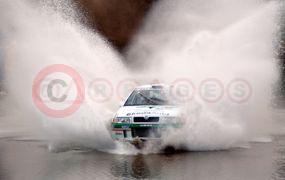 Škoda Motorsport will field two permanent entries on the 2003 FIA World Rally Championship. The team is pleased to announce that it has reached an agreement with former World Champion Didier Auriol to compete alongside Toni Gardemeister on all 14 rallies of next year’s season.

Petr Kohoutek, Škoda Motorsport Team Director, said, "We are naturally thrilled to have Didier driving one of our Škoda Octavia WRC cars next year. Not only is he the 1994 World Rally Champion, he also brings with him a wealth of experience. This will be vital to the future success of our team. We are sure that, together with Toni Gardemeister who has proved himself so often during this season, we have a formidable pairing in place for next year."

Auriol was equally enthusiastic, saying, "It is great to be part of a works team again. I have made a good choice with Škoda Motorsport, because we will make a perfect match. I know I have a lot of experience I can pass on."

Didier will once more be partnered by long-time co-driver Denis Giraudet, and the duo are looking forward to their first rally with the Škoda Octavia WRC in Monte Carlo next January. Didier loves the event, and commented, "This will be a great start to the season. I have won the Rallye Monte Carlo three times, so I think it suits my style of driving."

Toni Gardemeister, who has proved his worth during the 2002 season, will be the up-and-coming talent that complements the experience within the Škoda Motorsport World Rally Team. At 27, Toni is still one of the younger WRC drivers, albeit with 47 WRC rallies under his belt. Toni said, "I am really looking forward to continuing with Škoda Motorsport. Didier is one of the great drivers of all time and it is fantastic to be in the same team as him again. On top of that, he is a great character and a good companion."

Kenneth Eriksson, who has driven for Škoda Motorsport on every rally this year, is still in discussions with the team over his role in the coming season, as plans for a third works entry have not yet been finalised. Roman Kresta, who has shown enormous potential during his seasons with Škoda Motorsport, will stay with the team both on a national and international level. His program will be finalised later.

ŠkodaAuto Chairman Vratislav Kulhanek confirmed, "For Skoda, motorsport is an integral part of our strategy as can be seen from our history. We aim to be successful both in the marketplace and in competition. Therefore I welcome the strengthening of our team with a view toward our future success."

This is a 19-year+ news article, from our Skoda archive, which dates back to the year 2000.

If in doubt check with your local Skoda dealer as car prices and technical data will have changed since 2002.