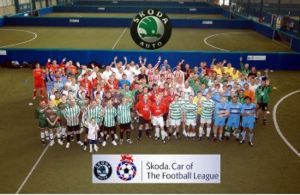 Škoda Auto UK, official car supplier for The Football League, kicked off its own football season on Sunday, 2 November with a five-a-side competition among Škoda retailers. Some 20 Škoda retailers sent teams to the Škoda Five-a-Side Championship at the JJB Soccer Dome near Derby. The tournament celebrated Skoda’s three-season sponsorship deal with the Football League.

After a long day of exciting football, Škoda Head Office emerged as the winning side. Sir Geoff Hurst, MBE, presented the award to the winners and other participants. Team Captain, Stuart Mason, was tired but happy, "We really enjoyed taking part in the tournament and faced some tough competition. It was great meeting Sir Geoff Hurst and we are delighted to have won the tournament."

Throughout the day, 140 players competed in 60 games. Sir Geoff Hurst added a magical touch on the day by making a special guest appearance. Many took up the opportunity to get autographs and have photos taken.

As the phrase "They think it’s all over" passes into the vocabulary books, Geoff Hurst, MBE, is the man who made sure it really was all over for Germany. He scored the last goal of his hat-trick in the dying moment s of the 1966 World Cup as the crowd streamed onto the pitch sealing the victory over Germany.

Stuart Morgan, who played on The Football League team said of the event "The tournament was a great way to celebrate Skoda becoming the official Car of The Football League and getting Skoda retailers from all over the country involved. There was real passion and pain in all the games with every player showing great commitment and we had a very enjoyable day. We look forward to working closely with Skoda over the next three years."