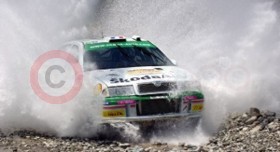 The Škoda Octavia WRCs made their final appearance on the FIA World Rally Championship in Cyprus at the weekend, having made a major impact at the highest level of the sport.

As it happened, neither of the Škoda Motorsport-entered cars was destined to finish in Cyprus, but they both left their mark on the event before retiring. Former World Rally Champion Didier Auriol was third fastest overall on the opening stage of the three-day event and, by the end of the first leg, team-mate Toni Gardemeister had moved up the leaderboard to ninth and looked set to continue his points-scoring finishes that have become so much a part of this year’s series.

Gardemeister’s landed awkwardly following a jump and hit a tree stump which damaged the Octavia’s engine too much to consider continuing, while Auriol was sidelined by electrical problems. Ironically, it was the first time in twenty-two events that Škoda Motorsport has failed to reach the finish of a round of the World Rally Championship.

However, the withdrawal of the Octavias now paves the way for the introduction of the new Škoda Fabia WRCs, and Škoda Motorsport Team Manager Pavel Janeba said "Obviously it is disappointing that we were unable to reach the finish of our final rally with the Octavia WRC, but we must now look forward to a new and exciting era with the Fabia WRC, starting next month in Germany."

The team drivers, too, will remember the Octavia with fondness as Toni Gardemeister put their thoughts into words, " The Octavia WRC has been a very good car for us and has been especially reliable - I will have good memories of it. We have done a lot of testing with the new Fabia WRC but there is still a lot of work to do, and I expect it’s first outing on Rallye Deutschland to be half rally, half test. Time, alone, will tell as to how we progress for the remainder of the season, but I am very encouraged."

In spite of the non-finish in Cyprus, the Škoda Motorsport Team are still fifth in the Manufacturers’ section of the FIA World Rally Championship and Toni Gardemeister is 10th in the Drivers’ points table.

The next outing for the team, and the first for the Škoda Fabia WRC, will be Rallye Deutschland, 25-27 July.