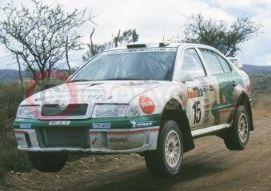 Extreme conditions and searing temperatures combine to make the eighth round of the World Rally Championship a true endurance test of driver and car. Drivers face all sorts of obstacles on the African round of the World Championship, including waterholes, dried-up rivers, and even giraffes. The rough tracks of Africa have always shown the Škoda Octavia WRC´s strength and reliability, however, with the team finishing on the podium last year. Škoda Motorsport’s driver line-up, with its combination of youth and experience, puts them in a strong position to pull off another good result.

This will be Škoda driver Kenneth Eriksson´s sixth Safari Rally, and he is looking forward to the chance to put his Octavia WRC through its paces on rough gravel. "The Safari is tough for crews and cars but I like it a lot," said the 46-year-old. "I enjoy long, fast stages and I believe we have a good chance to match what Armin Schwarz achieved last year."

Eriksson has finished second on the event in the past, and has been encouraged by recent tests of the Octavia WRC in Finland. "We completed the test a few days ago and it was quite OK," said the Swedish driver.

Toni Gardemeister has less Safari Rally experience than his team-mate Eriksson, having last competed on the Safari in 2000 but he has shown grit and determination on loose surfaces, traditionally the domain of Scandinavians. The 27-year-old is enthusiastic, saying. " I really like this event - it is a long, fast and open rally. After the test in Finland I am quite happy about our Octavia WRC. I think Safari suits our cars, and I´m optimistic about a great result."

Škoda Motorsport´s third car will be driven by their young Czech protégé Roman Kresta. The reigning Czech champion is also tackling the Safari for the second time. "Safari is a very exotic and difficult event - thanks to the weather and its sheer length," he said. "I´m looking forward to it, but the only concern I have is the rain."

Weather conditions in Africa are yet another fascinating element of the lottery that is the Safari Rally. Temperatures can fluctuate between baking heat and torrential rain. Bad weather is expected near Nairobi next week, but Škoda Motorsport team principal Pavel Janeba is confident the team is well prepared. "The test in Finland showed how strong the Octavia WRC is," he said. "For the African event, we have made several changes to the undertray and roof-vents, and we have also improved the car´s waterproofing. The Safari Rally is notoriously hard, and we have only been there twice. Our first season was a learning year, but I think we showed our potential with third place in 2001. We´ve got the chance to get a really good result in Africa - and I´ll be happy with at least one Octavia finishing in the points," he added. The Safari Rally, based in Nairobi, is the longest round of the World Championship, covering approximately three times the competitive distance of the other events.

This is a 19-year+ news article, from our Skoda archive, which dates back to the year 2000.

If in doubt check with your local Skoda dealer as car prices and technical data will have changed since 2002.