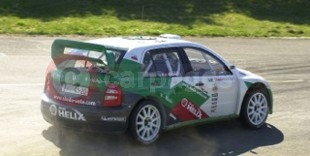 The Chairman of Škoda Auto, Vratislav Kulhánek, announced at the International Brno Motor Show today that the much-anticipated debut of the Škoda Fabia WRC is planned to take place at next month’s Rallye Deutschland, round 8 of the 2003 World Rally Championship. The Škoda Motorsport driver line-up for that event will be the current pairing of Didier Auriol/Denis Giraudet and Toni Gardemeister/Paavo Lukander.

The initial test programme of the new car has progressed at such a pace that Škoda Motorsport feels the time is now right to step up a gear and continue the development of the car at a higher level.

The Škoda Fabia WRC was launched at the Geneva Motor Show in March this year. It is based on the new Fabia vRS model that was also unveiled at the same time.

In Brno today, Mr. Kulhanek said: "This is a very special day for Škoda Auto and Škoda Motorsport. The new Fabia WRC is a key part of our strategic plan for the next three years. As already confirmed during our initial testing, the car holds great potential. The development of this car is not over yet at all, but the testing in real rally conditions will generate even greater progress. We do not expect miracles immediately, but I am sure that within the next three years the team, the Škoda brand and our many enthusiastic fans will benefit from this global project. I wish the Škoda Motorsport Team ‘Good luck’ for its debut with our new car."

With the first WRC entry of the Fabia WRC coming in just seven weeks, the team schedule will be extremely busy. Both Didier Auriol and Toni Gardemeister will focus on the final preparations and therefore will not enter Škoda Motorsport’s ‘home’ round of the European Rally Championship, Rallye Bohemia, two weeks earlier as originally planned. Škoda Auto will, however, still be represented at the Bohemia Rally by German champions Matthias Kahle/Peter Göbel and the young Czech stars Jan Kopecky/Filip Schovanek, both driving Škoda Octavia WRCs.