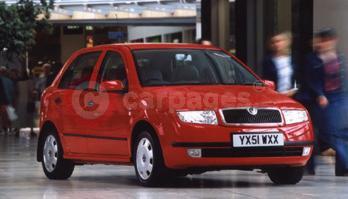 The Skoda Fabia, What Car? Magazine’s Car of the Year in 2000, is now a million seller. The 1,000,000th Fabia drove off the production line at the ŠkodaAuto plant in the Czech Republic at 10:00 on 8 April 2004. The silver Fabia vRS was handed over to a Škoda customer from the UK in a ceremony at the factory.

Vratislav Kulhánek, the Chairman of Škoda Auto, presented the car, saying, "I am pleased to see that our millionth Fabia has been made for a customer from Great Britain; and not only because this country belongs to our largest markets. It is in Great Britain that the transformation of the Škoda brand has become fully evident. Whereas, prior to 1991, we were a much-derided brand in the UK, nowadays Škodas are respected by customers in this demanding market."

One of the most successful Škoda cars in the company’s history, the Fabia model made its debut at the International Motor Show in Frankfurt in 1999. The Fabia Estate followed a year later with a saloon version introduced in 2001. The incredibly successful Fabia vRS was launched in mid-2003.

Fabia sales in Great Britain have totalled 80,860 since the launch in 2000 through First Quarter 2004. Included in that total are some 1,400 Fabia vRS sales. Worldwide, Fabia sales split into some 622,000 hatchbacks (including vRS), 300,000 Estates and 76,000 sedan models. Fabia accounts for approximately 60% of total Škoda sales annually.

Fabia’s trophy cabinet is full to bursting, with awards from one end of Britain to the other, in recognition of its outstanding design and fantastic engineering. In addition to being named as the Car of the Year by What Car?, the Fabia won the Auto Express Car of the Year award in 2000 and was named Best Supermini by What Car? for three years running (2000 – 2002). Further additions to Fabia’s trophy cabinet included the Diesel Car’s Best Diesel Supermini award in 2001 and The Scottish Group of Motoring Writers’ Fabia Diesel Car of the Year award for the Fabia vRS in 2001.

In addition to awards, surveys of owners in the UK bear out Fabia’s popularity. In the 2003 Which? car survey, nearly nine out of ten Fabia owners said they would recommend their car to a friend, with 90% of Fabia’s sister model, Octavia, saying the same. The nine-out-of-ten theme continued with the 2004 Auto Express Driver’s Power survey, with 93% of Fabia owners and 95% of Octavia owners saying that their car had lived up to their expectations.

One million Fabias, an overflowing trophy cabinet and overwhelming customer satisfaction, along with the continued success of the Škoda Superb and Octavia, and a new Octavia model coming this year – Škoda continues to grow in size and strength.

This is a 17-year+ news article, from our Skoda archive, which dates back to the year 2000.

If in doubt check with your local Skoda dealer as car prices and technical data will have changed since 2004.

Skoda Fabia Images may not be UK specification cars. Colours and exterior and/or interior elements may differ from actual models.