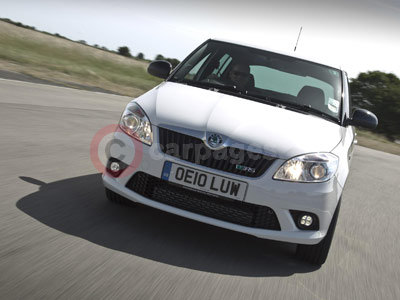 On Wednesday 16th March 2011, Skoda UK was awarded silver at the British Television Advertising Awards, now known as the British Arrows, in the Vehicle Advertising category.

The annual award ceremony, held at Battersea Evolution in Battersea Park, London, was attended by more than 1,000 guests. Skoda's marketing team was among those at the event, which saw the new Skoda Fabia vRS launch advert beat off stiff competition from 17 entrants in the category.

The 12-week campaign, which launched on 1st November 2010, centered on a 60-second TV commercial, in which Skoda unveiled a 'meaner' side for the high-performance Skoda Fabia vRS. The advert featured a 'Made of Meaner Stuff' strapline - a darker twist on the Skoda Fabia's 'Made of Lovely Stuff' proposition which was made famous by the 2007 Skoda Fabia 'Cake' commercial.

Heidi Cartledge, Head of Marketing at Skoda UK, said: "This was our biggest campaign ever in the UK, and was designed to engage our brand with new audiences. The 'Made of Meaner Stuff' advert, combined with our wider campaign activities, saw Skoda reach a younger, 'hot hatch' demographic in addition to our mainstream and loyal customers. We're delighted that the public and industry experts alike enjoy the ad as much as we do."

"2010 saw record volume sales for Skoda and we now have a larger market share than ever before," added Heidi. "We plan to continue investing in marketing over the next five years to support the brand's ambitious growth aspirations.

"We're delighted with this award and would like to thank everyone that voted for us."

British Arrows is the new name for the British Television Advertising Awards which began in 1976 to recognise and reward the best television and cinema commercials made by British advertising agencies and production companies.

This is a 10-year+ news article, from our Skoda archive, which dates back to the year 2000.

If in doubt check with your local Skoda dealer as car prices and technical data will have changed since 2011.