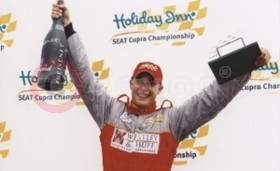 Robert Huff is the Holiday Inn SEAT Cupra Champion after winning the first of the two title deciding races at Thruxton circuit on Sunday 16 August.

Having led the Championship from the second round onwards, the 23-year old Marshall of Cambridge driver piloted his race prepared 250 PS Leon Cupra R to victory on round nine of the Championship, with one round still to run.

Robert now claims the biggest prize in British Motorsport – a works drive with SEAT UK in the 2004 FIA European Touring Car Championship and all the trappings that come with being a professional racing driver including the use of an apartment in Monaco.

The second race at Thruxton was won by Stefan Hodgetts, who had been Huff’s closest competitor in the Championship, but unfortunately had to retire from the first Thruxton race with a puncture, although he was leading at the time. The second race was broadcast live on ITV2 on Sunday afternoon.

The focus for the remaining drivers now shifts to the two races of the SEAT Cupra Super Prix which take place at Brands Hatch on 27 September. No less competitive, the Super Prix will give the drivers the chance to win large cash prizes to help fund their Championship race activities next year. These races will be made even more interesting as the grid positions for the first race will be chosen by a "race idol" style web vote on www.seatcuprachampionship.com where fans can vote for their favourite driver.

Full details of the two races at Thruxton, the SEAT Cupra Champion and all the behind the scenes news and gossip can be found at www.seatcuprachampionship.com where you can also cast your vote for the SEAT Cupra Super Prix.