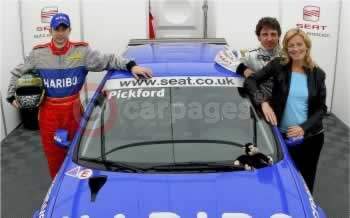 Racing Rivals charges onto Channel 4 on Saturday 14 August, when the high-octane series that follows the spectacular ups, downs and spinning around of drivers in the 2004 Holiday Inn SEAT Cupra Championship begins.

Produced by 4D Productions and Granada Sport, the 6 x 30 minute series is presented by Terri Dwyer (Hollyoaks, Loose Women, The Games) and Jason Plato (Driven, Fifth Gear, Speed Sunday). Terri’s love of sport and Jason’s knowledge of motor racing – he was the 2001 British Touring Car Champion – combine to ignite the passion that goes on behind the scenes of Britain’s top single-make saloon car championship.

With access to all areas the Racing Rivals film crew are shadowing the 18 drivers over 12 races and six race circuits, delving into their personal lives to find out what motivates them to race at speeds of up to 150mph, chasing their dream of becoming a professional racing driver.

There is an international flavour to this year’s SEAT Cupra Championship, with an American driver from Cleveland, Ohio (who was last year diagnosed with testicular cancer) and a flamboyant youngster from Portugal racing against some of the hottest young drivers from Britain. The youngest driver is 19-year old Ben Winrow from Northampton, while the oldest is a super-fit 48-year old telecoms engineer from Dublin – who doesn’t drink or smoke and who could give any Formula 1 driver a run for their money in the gym.

Episode One follows the ambition-fuelled drivers to the opening race at Brands Hatch, where their fiery competitiveness is unleashed on the racetrack. Fantastic in-car and track-side camerawork captures all the incidents, with Ben Edwards providing expert race commentary.

While the winning drivers spray champagne, there is no love lost back in the paddock as other drivers declare war on one another – and this is only the start of the season!

Terri Dwyer said: "Although I’m an avid sports fan, I didn’t have much knowledge of motorsport before we started filming Racing Rivals – and now I’m a big fan. I’m enjoying filming the show even more than I expected and after getting to know all the drivers it’s difficult to stay impartial. They’re a lovely bunch and filming is a real scream."

Jason Plato said: "There are some very interesting characters in this year’s SEAT Cupra Championship. Some are extremely good racing drivers on the verge of the biggest break in their careers, some know they are close to blowing the best career opportunity they are ever likely to have and my mother has more chance of becoming a professional racing driver than some of them! The mix of personalities in such a high pressure race day environment is electric."

The transmission times for Racing Rivals on Channel 4 are:
Published : 05/08/04 Author : Melanie Carter