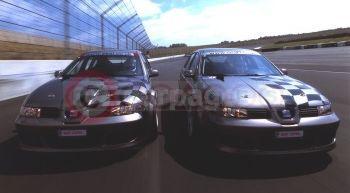 With a prize fund in excess of £600,000 and a winning prize of a salary-paid works drive with SEAT UK in the 2004 European Touring Car Championship, it is one of the biggest awards offered in British motorsport.

The SEAT Cupra Championship will be televised on ITV1, with a docu-soap style based around the drivers. The programmes, produced by Granada and 4D, are planned for peak weekend viewing during the summer of 2003. A further series of in-depth programmes planned for ITV2 will add to the exposure, and provide drivers with an unrivalled opportunity to attract sponsorship and build their personal profiles for their future careers in motorsport.

In addition, drivers will also benefit from media, marketing and physical training seminars and be paid for personal appearances made on behalf of SEAT UK.

The SEAT Cupra Championship 'package' is designed to help Britain produce the next Johnny Herbert – while the current Johnny Herbert, who has tested and raced the 250bhp SEAT Leon Cupra R, is very supportive of the new championship. "It is good for British motorsport that we have something like this where we can actually try and produce British stars of the future," says the former Formula 1 Grand Prix driver.

The 12 race one-make series will be held over six weekends, with the 'double-header' meetings running alongside the British F3 / GT programme – the dates of which are still to be confirmed. Each SEAT Cupra Championship race will have a dedicated qualifying session and a race distance of at least 30 miles.

More details of the SEAT Cupra Championship package will be available at the Autosport International Show (January 10-12). The series will be officially launched in Spain in the spring of 2003 – where the 20 identical SEAT Sport-built Leon Cupra R race cars will be presented to the 20 registered drivers.

Mark McKenna, SEAT UK Head of Marketing, said: "It's a fantastic opportunity for young drivers to acquire a professional contract which on paper is worth over half a million pounds. A young driver can enter the championship at seventeen years of age and at the age of eighteen be competing at top European tracks as a works driver for SEAT UK."

Drivers can register their interest for more information at www.seatcuprachampionship.com